NCSHP sergeant helps deliver baby on side of road 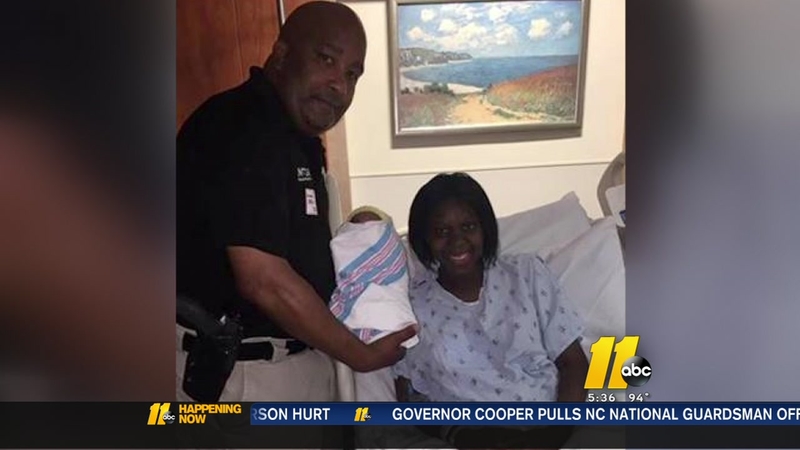 RALEIGH, NC (WTVD) -- Sergeant W.C. Johnson has been with the North Carolina State Highway Patrol for more than 26 years, but Monday's experience was a professional first.

He was traveling along Capital Boulevard near Highwoods Boulevard in Raleigh when he saw a silver SUV in the median with a man trying to flag him down.

"And I pulled into the median, and as I stepped out of the car, I heard him say 'I need help, my daughter's having a baby now,'" recalled Sgt. Johnson.

He quickly called in for assistance, but with no time to spare, he grabbed a set of gloves and got in position, and relied on training and personal experience.

"Back to 14 years ago when my own child was born, I had to think to what the doctor was doing and telling me to do in that delivery room," said Sgt. Johnson.

"It felt like it was hours," said Sgt. Johnson.

Shortly after the delivery, Sgt. Johnson heard firefighters making their way to the scene.

"I reached in and I picked the baby up and unwrapped the umbilical cord from around the baby's neck," Sgt. Johnson explained, adding he was able to visit both later in the hospital.

Both mother and child are doing well.

For Sgt. Johnson, who oversee's the area's accident reconstruction unit which often involves working fatal crashes, it was a special experience.

"So seeing death all the time to seeing a birth come into the world is very refreshing," explained Sgt. Johnson.

At this time, the family is requesting privacy so they can spend a few days alone with their newest addition.