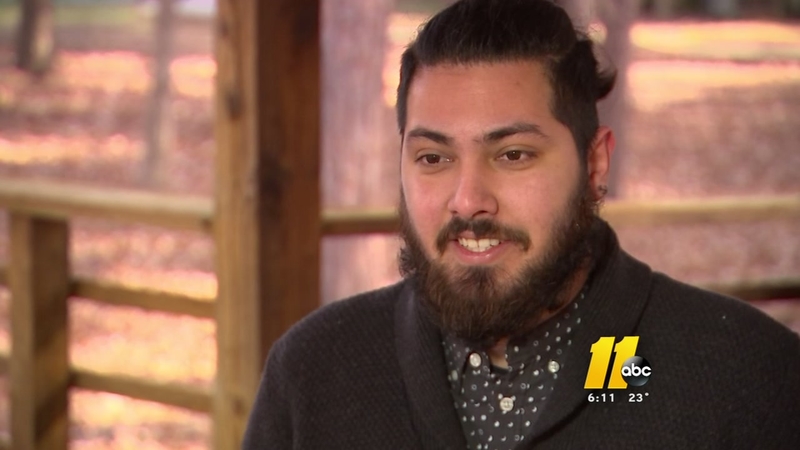 He bought a $100 plane ticket to the Triangle with the hopes of starting a brand-new life.

What a way to start the new year! A new job and wedding bells for this couple as they look to start new after their homes were severely damaged by Hurricane Maria. #ABC11 pic.twitter.com/XTZiQb49y5

Santiago, who is earning a second bachelor's degree, moved to Durham and within eight days of relocating earned a job at an Old Navy store in Durham.

He was hired as a seasonal employee but that changed two days after Christmas when he was told he would be kept on as a permanent employee.

"It's been a wonderful experience," Santiago said. "It's really good because I thought I would have to search for a new job after seasonals and now I'm actually staying there. It was more like a Christmas gift than anything else."

Christmas ended up being the gift that kept on giving. Christmas morning, Santiago proposed to his girlfriend of three years.

"Everybody was in on it except me," said 29-year-old Michelle Munoz. "And after everything that we've been through it was nice to have something just positive. Especially since he's been working so hard over here and we've been making it work," she said.

Munoz is still living in Puerto Rico but was in Durham for the holidays. The schoolteacher plans to return to Puerto Rico later this week and move to Durham to be with her fiancé at the end of the school year.

"It just feels like we're moving in the right direction," she told ABC11. "I didn't want to move here and leave my kids."

Munoz, however, considers the couple's new adventure to be a blessing given many Puerto Ricans are without power, work, and continue to struggle with everyday life.

"I know it doesn't just feel like it. We are one of the lucky ones. There are still people living under really terrible circumstances," she said.

Once Munoz moves to Durham, the couple plans to stay in the Triangle for good.

"I have family back home, which I am eager to go and visit and that's about it," Santiago said. "I don't think I'm ever moving back."

"We're trying to start something new elsewhere," Munoz said, "And we'll see where that adventure takes us."