WTVD-AP
NASHVILLE, Tenn. -- The NFL draft got Round 1 in the books with some early surprises among the picks.

Nashville dodged the worst of thunderstorms and rain that had been predicted for much of Thursday. But not long after NFL Commissioner Roger Goodell announced Kyler Murray as the No. 1 pick overall to Arizona, the rain started falling.

Here's who was selected Thursday night:

Oklahoma quarterback Kyler Murray is the first pick in the NFL draft, going to Arizona and immediately creating a quarterback quandary. 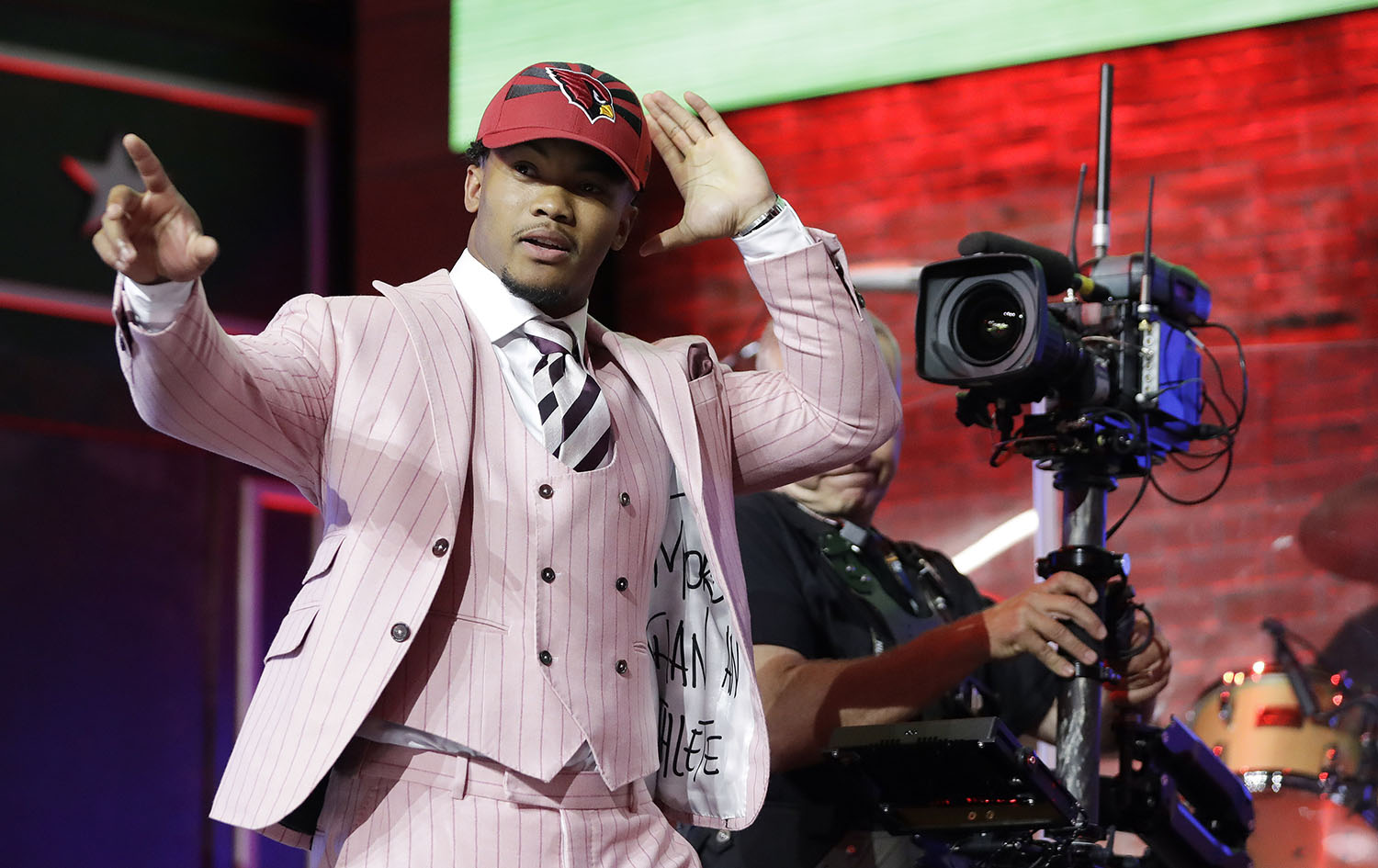 Oklahoma quarterback Kyler Murray waves after the Arizona Cardinals selected Murray in the first round at the NFL football draft, Thursday, April 25, 2019, in Nashville, Tenn.

A year after the Cardinals traded up to the 10th spot to grab Josh Rosen, they went with Oklahoma's dynamic Heisman Trophy winner. The team apparently believes Murray is a better fit running the offense of new coach Kliff Kingsbury, who worked in the Big 12 that Murray dominated last season.

Murray is the second straight Sooners quarterback taken atop the draft, following another Heisman recipient, Baker Mayfield, who went to Cleveland last year. Mayfield had a superb rookie season, and the Cardinals can only hope Murray has a similar impact in the desert.

Ohio State edge rusher Nick Bosa went to San Francisco as expected. The 49ers have used a first-round selection on four defensive linemen in the past five drafts.

Bosa is considered the top pass rusher in this group. His older brother, Joey, plays for the Chargers and was the 2016 Defensive Rookie of the Year. Their father also played in the NFL.

Bosa is the highest Ohio State draft pick since offensive tackle Orlando Pace went No. 1 to St. Louis in 1997.

Bosa missed all but three games last season with a core muscle injury, but already had exhibited the kind of playmaking that lifts players to loft status. Such as the second pick in the draft.

The New York Jets held onto the third pick and took defensive tackle Quinnen Williams of Alabama, a dominant man in the trenches accustomed to playing in big games. The Jets were widely speculated to want to trade down, but instead got a building block for their defense and new coach Adam Gase.

Not even a starter before 2018, Williams won the Outland Trophy last season and is Alabama's highest-drafted defensive player since linebacker Cornelius Bennett went No. 2 overall in 1987.

Oakland, which owns three first-round spots, took the third straight defensive lineman in a draft loaded with them, selecting Clelin Ferrell of Clemson.

A two-time All-ACC player who has pass rushing skills on the edge, he is the first of several national champion Tigers likely to go very high from their outstanding D-line.

Up next was Tampa Bay, which had a sieve of a defense last season. So the Buccaneers, with new coach Bruce Arians - and offensive mastermind- chose LSU linebacker Devin White, the Butkus Award winner who led the SEC in tackles.

He's exactly the kind of playmaker the unit has lacked for several years and had the highest percentage of pass pressures in FBS last year.

The Giants ended a mini-run of D-linemen when they took Duke quarterback Daniel Jones, who has learned under Blue Devils coach David Cutcliffe - the same man who tutored Peyton and Eli Manning. 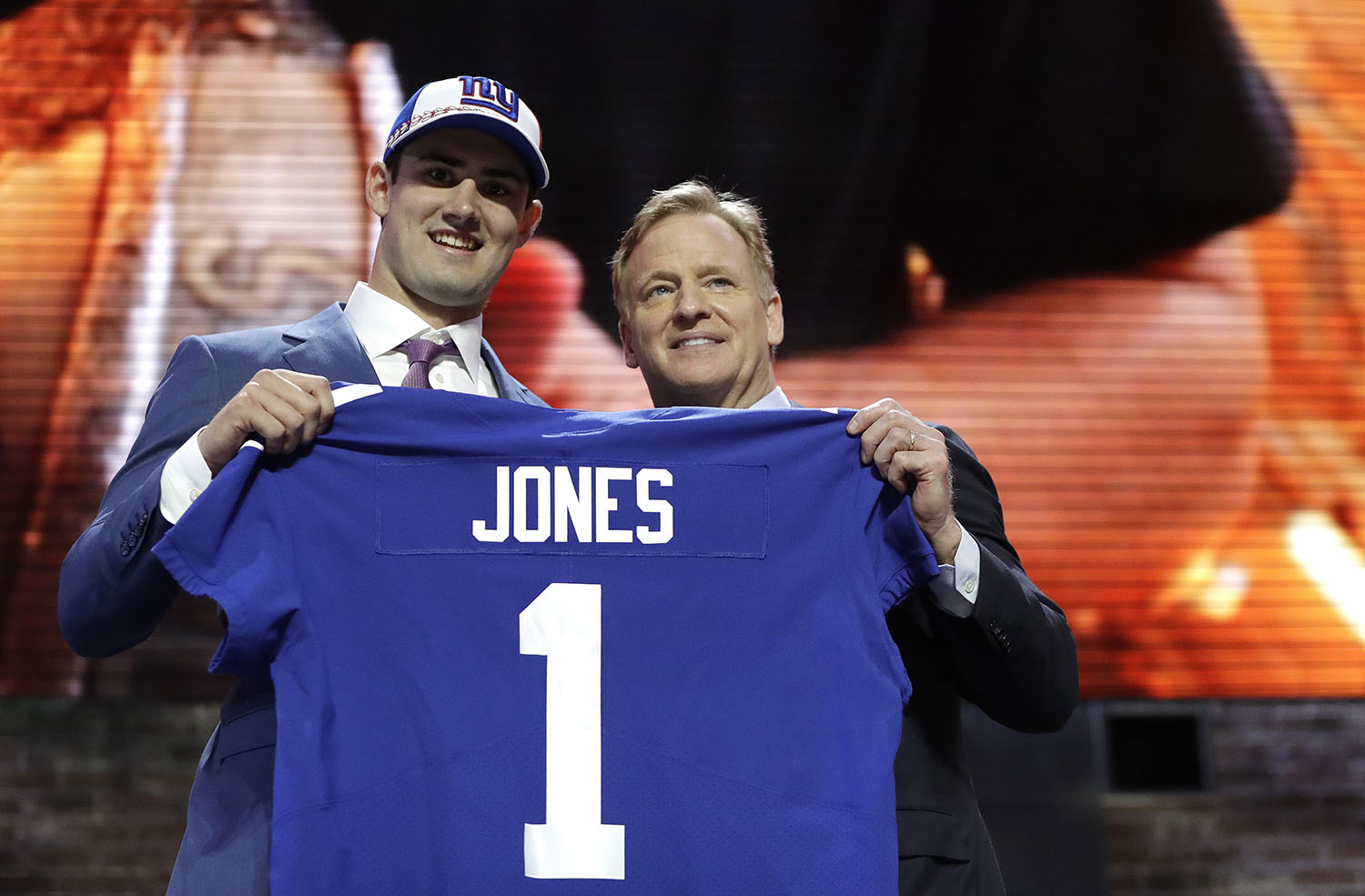 Jones was considered an outsider to go in the opening round until recently, and the Giants clearly feel he can do some more learning under Eli Manning before taking over as their signal caller.

Jones was the MVP of the Senior Bowl.

Kentucky's Josh Allen, the national defensive player of the year (Bednarik Award) and a fast, physical linebacker, went to Jacksonville at the seventh spot.

The Jaguars have some significant needs on offense, but Allen generally was projected to go in the top five picks.

It's the second successive draft in which Josh Allen went seventh. Buffalo took the Wyoming quarterback by the same name in 2018.

Iowa tight end T.J. Hockenson, who seemed destined for Jacksonville before Josh Allen fell to the Jaguars, went at the eighth pick one spot later to Detroit.

Hockenson is an all-around tight end with blocking skills, speed and savvy. He finds open areas in defenses and doesn't drop the ball.

Buffalo also shored up its defensive line with tackle Ed Oliver, a three-time All-AAC player who didn't have a great 2018 season after being dominant the previous years, including first-team All-America in 2016.

He had 50 tackles for loss or no gain in the past three years, leading FBS.

The first trade of the 2019 NFL draft lifted Pittsburgh from 20th to 10th, swapping with Denver.

Pittsburgh doesn't often make such bold moves in drafts, but after missing the playoffs last season, and with Ryan Shazier unlikely to play again because of a severe injury, getting Bush was a key to rebuilding the defense.

One spot after Pittsburgh jumped in front of them, the Cincinnati Bengals bolstered their offensive line by grabbing Alabama tackle Jonah Williams.

He can play either side of the line, is strong and mobile, and technically sound.

Just like Michigan linebacker Devin Bush, the player the Steelers traded up ahead of the Bengals, to get, Williams should be an immediate starter.

When Michigan linebacker-defensive end Rashan Gary was told he'd gone 12th overall to Green Bay, he broke down in tears at home.

Gary, who has formed his own agency to represent athletes, is quick, strong and was a two-time All-Big Ten choice.

More defense -and another lineman- followed as Miami shored up its trenches with Clemson DE Christian Wilkins. He played four seasons for the Tigers and was a terror for several of them, making All-America.

He had 53 tackles for no gain or a loss in his career.

The Redskins took Ohio State quarterback Dwayne Haskins, who some had projected as high as No. 6 to the Giants. Haskins, a hometown jud from Maryland, will have a change to make an immediate impact in Washington.

With their first pick, the Panthers took outside linebacker Brian Burns from Florida State. 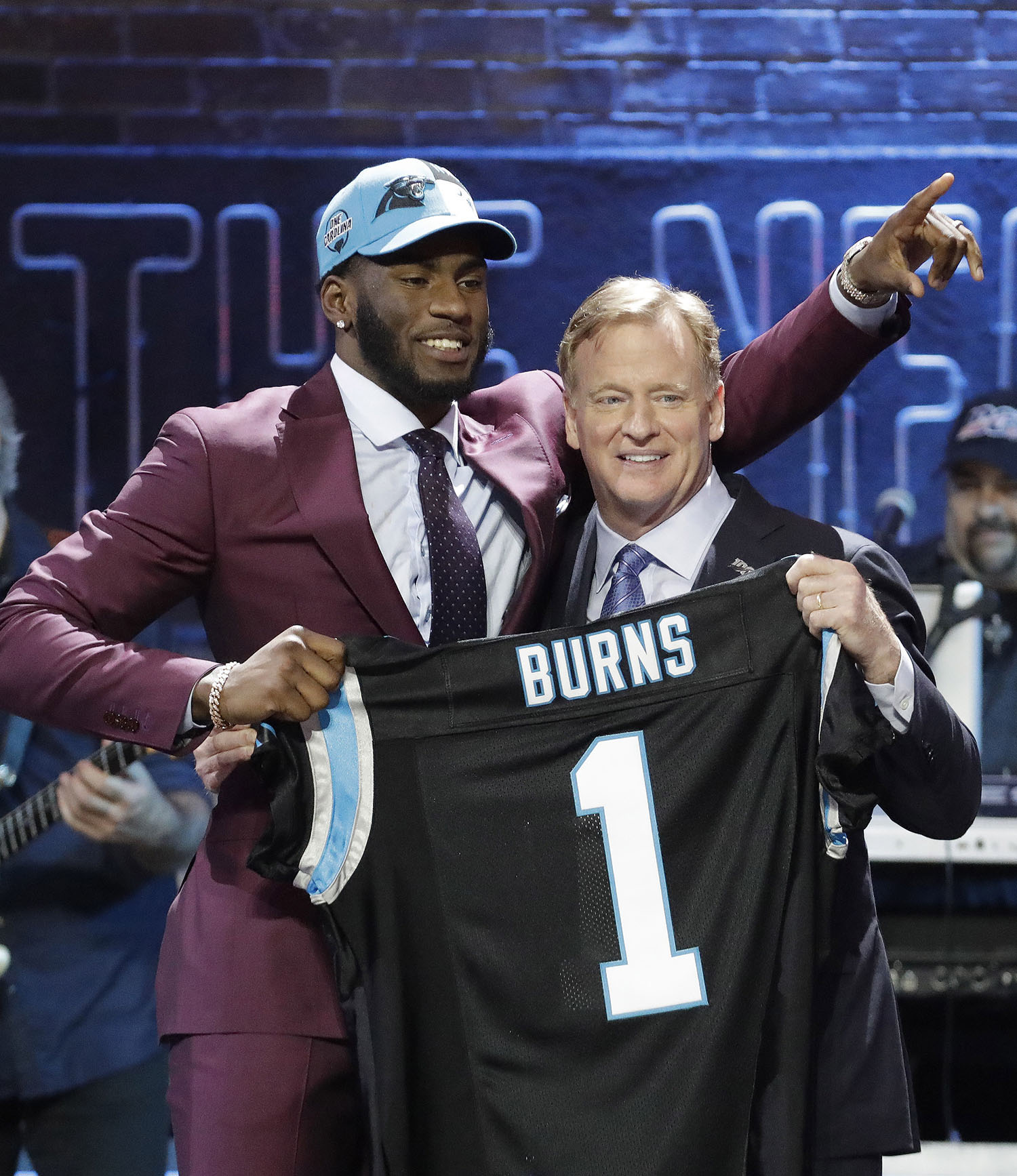 Dexter Lawrence has become the third Clemson defensive player taken in the first 17 selections of the NFL draft.

The New York Giants picked the former Wake Forest High School star at 17 to help their defense after drafting a quarterback in Daniel Jones at No. 6. Lawrence joins Clelin Ferrell taken by Oakland and Christian Wilkins drafted by Miami despite being one of three on the Tigers' roster to test positive for a banned substance called ostarine. Wilkins was suspended from Clemson's bowl game along with the other two players and also missed the national championship game.

The Minnesota Vikings selected North Carolina State center Garrett Bradbury with the 18th overall pick in the NFL draft on Thursday night, using their first-rounder on an offensive lineman for the first time in seven years.

With the front five again their position of greatest need , the Vikings could hardly have had the board fall to them any better. Alabama tackle Jonah Williams, who could wind up as a guard in the NFL, was the first blocker off the board at No. 11 to Cincinnati. Boston College guard Chris Lindstrom went to Atlanta at No. 14.

Then the Vikings had their pick of the rest, with Florida tackle Jawaan Taylor, Oklahoma tackle Cody Ford and Washington State tackle Andre Dillard also available. With the 6-foot-3, 306-pound Bradbury , the Vikings got a natural fit with the inside zone-blocking scheme they'll be favoring to try to generate more of a running game and keep the pressure off quarterback Kirk Cousins.

Bradbury ran the 40-yard dash in 4.92 seconds at the scouting combine, the third-fastest time among all offensive linemen. He finished the three-cone drill in 7.41 seconds, the fastest of his position group. The endorsement of new offensive adviser Gary Kubiak carried plenty of weight in the room. So did the impression of defensive line coach Andre Patterson from his evaluation of prospects on the other side, when he walked in coach Mike Zimmer's office one day.

Bradbury was the nation's top center and became the first of several Wolfpack players expected to hear their names called during the 2019 draft.

Tennessee gambled by taking defensive tackle Jeffrey Simmons from Mississippi State at No. 19 despite him tearing his left ACL in February.

He's now the second tight end taken in this draft and will be a welcome option as Flacco settles in with the Broncos.

Denver has Jake Butts, but he has played just three games in his first two seasons because of ACL injuries.

The Green Bay Packers are working hard to improve their defense. After taking defensive end Rashan Gary at No. 12, the Packers traded up to No. 21 from 30th overall to select speedy safety Darnell Savage Jr. of Maryland.

The Packers obviously like the safety who ran a 4.36-second 40-yard dash at the combine in February.

The Seahawks now will pick at No. 30 and also added a pair of fourth-round selections at Nos. 114 and 118 in the deal.

Baltimore traded down three spots with Philadelphia, and the Eagles used the 22nd pick on a big offensive tackle in Andre Dillard as a possible heir apparent for Jason Peters who's now 37. The Ravens picked up selections No. 125 in the fourth round and No. 197 in the sixth round.

Watson was sacked an NFL-leading 62 times as Houston won the AFC South but lost to the Colts in the wild-card round. Watson played every game in his second year after having season-ending knee surgery as a rookie, but was hurt for a chunk of the season while dealing with a partially collapsed lung and broken ribs from taking hit after hit.

It was the just the second time Houston had selected an offensive lineman in the first round. The last was left tackle Duane Brown with the 26th pick in 2008.

The Raiders took running back Josh Jacobs from Alabama

With the pick from Philadelphia, the Ravens took wide receiver Marquise Brown of Oklahoma.

The Redskins used this pick on defensive end Montez Sweat of Mississippi State.

With the pick they obtained from Dallas, the Raiders took safety Johnathan Abram of Mississippi State.

With this pick from New Orleans through Green Bay and Seattle, the Giants took cornerback Deandre Baker of Georgia.

Atlanta, with this pick from the Rams, took offensive tackle Kaleb McGary of Washington.