James Harden scores 53, ties Wilt for most points in triple-double 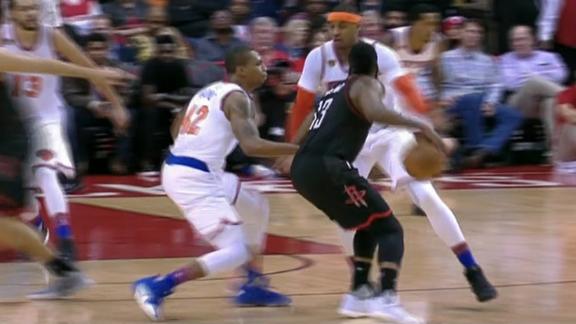 HOUSTON -- Minutes after collecting 53 points, 17 assists and 16 rebounds in his second straight triple-double, Houston's James Harden was asked what it has been like to play in new coach Mike D'Antoni's system.

"It's been a dream so far," Harden said.

It looked more like a nightmare to the short-handed New York Knicks after Harden powered the Rockets to a 129-122 win on Saturday night.

"It was like NBA 2K numbers," New York's Brandon Jennings said, comparing Harden's performance to the video game. "I just told him afterward to just go and get the MVP and keep balling and doing what he's doing."

Harden became the first player in NBA history to have at least 50 points, 15 assists and 15 rebounds in a single game, according to information provided by the Rockets from the Elias Sport Bureau. He also tied Wilt Chamberlain for most points in a triple-double, set career highs for points and 3-pointers with nine and matched his career best for assists.

He passed his previous career best of 51 points on a 3 with 1:16 left, leading to a standing ovation.

"It looked very effortless," teammate Ryan Anderson said. "But it just goes to show how great of a player he is."

Harden has thrived as the point guard in D'Antoni's fast-paced system. He is averaging 28.5 points and an NBA-best 12 assists per game.

The Knicks got within three several times in the fourth quarter, with the last time coming on a layup by Joakim Noah with about four minutes left. Harden responded to Noah's basket with three free throws before dishing to Anderson for a 3-pointer that made it 119-111.

Another 3 by Anderson with less than two minutes left extended the lead to 124-113.

Harden, who had 30 points, 13 rebounds and 10 assists in Friday night's 140-116 victory against the Clippers, completed his eighth triple-double this season when he grabbed his 10th rebound with about 10 minutes left in the third quarter.

It was his 17th career triple-double and his fourth career 50-point game.

The Knicks played without starters Kristaps Porzingis (sore Achilles tendon) and Courtney Lee (sore right wrist) due to injuries. They lost another one at halftime when Carmelo Anthony was sidelined by a sore left knee. He had seven points in the first half.

"I just decided at the last minute to just go out there and play and try to get going and the more I played the (more sore) it got ... I don't think it's that serious," Anthony said.

Anderson added 25 points for the Rockets, who have won four in a row.

Jennings had a season-high 32 points for New York, which has dropped four straight.

Harden made two foul shots in the final seconds to lift Houston to a 99-92 lead after three.

D'Antoni took a minute out of his pregame talk with reporters to wish his father Lewis D'Antoni a happy birthday. The elder D'Antoni was celebrating his 103rd birthday on Saturday.

The coach was asked about the best lesson he had learned from his father.

"Probably how to stay alive," he said with a chuckle.

Then he got serious.

"There's just so many (lessons) ... just the way he approached life was remarkable," he said.

D'Antoni on the Rockets going 15-2 in December: "We're good but we need to get a lot better because we've got more aspirations. We've got a lot of things we've got to do."

Knicks: F Kyle O'Quinn sat out because of an illness. ... Willy Hernangomez received a flagrant 1 foul in the fourth quarter after elbowing Anderson in the stomach. ... Derrick Rose finished with 21 points.

Rockets: G Patrick Beverley missed the game with pain in his right wrist. ... Friday and Saturday marked the first time Houston had played home games on consecutive days since February 2012. ... The Rockets have scored at least 66 points in the first half of the last four games. ... Eric Gordon added 15 points.