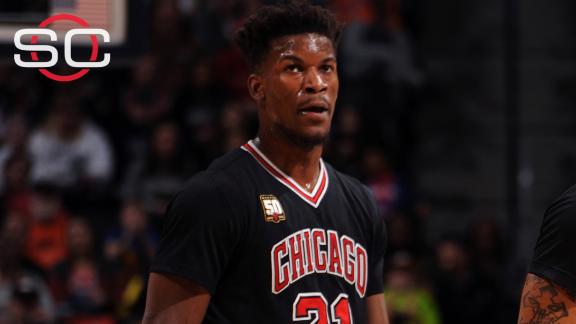 CHARLOTTE, N.C. -- Chicago Bulls All-Star swingman Jimmy Butler will miss an additional 3-4 weeks with a left knee sprain, the team announced on Tuesday, meaning he will not play in the All-Star Game in Toronto on Sunday.

Butler suffered the knee sprain during the second quarter of last Friday night's loss to the Denver Nuggets. Initially, the Bulls did not believe the injury was going to be too serious, but a subsequent checkup on Tuesday caused them to shut Butler down for at least another month.

Butler will sit out the All-Star Game after being voted to the team for the second straight season. The league announced that teammate Pau Gasol will take Butler's place at All-Star Weekend.

Gasol is averaging 17 points and 10.9 rebounds per game this season. He'll go to his second straight All-Star Game and sixth overall.

Butler's absence comes at the worst possible time for the Bulls given that they enter Wednesday's game against the Atlanta Hawks having lost 12 of their last 17 games. Butler, who was open all year about his desire to play in all 82 games this season after making a bet with his trainer, missed his first game of the year on Feb. 3 because of left knee tendinitis.

Bulls head coach Fred Hoiberg acknowledged after Monday's shootaround that while Butler was improving, he still had soreness in the knee. When asked why there was still no clear-cut timeline for Butler's return, Hoiberg admitted he wasn't sure.

"Good question," he said. "It's what it is right now. It's an injury that a lot of it is based on how he recovers, and the important thing is, he's making progress. We'll continue to get him treatment, and if he can continue to make progress, a lot of this will be based on how he feels."

Butler leads the league in minutes, averaging 37.9 a game. The Bulls also played without Derrick Rose in a loss to the Charlotte Hornets on Monday. Rose cited general body soreness as his reason for sitting out. The only silver lining for a Bulls team that is already playing without Joakim Noah (season-ending shoulder surgery) and Nikola Mirotic (appendectomy and hematoma removal -- return unclear) is that veteran Mike Dunleavy made his season debut on Saturday after missing the entire year up to that point due to offseason back surgery. With Butler out of the lineup for the foreseeable future, the Bulls will have to rely on young players Tony Snell and Doug McDermott, both of whom have struggled to produce despite being given spots in the rotation this season.

The Bulls said in a statement that Butler has already started the rehab process and "he will be allowed to engage in all activities as tolerated with the primary goal of maintaining his conditioning over the ensuing weeks."

Friedell: Butler loss 'couldn't come at a worse time'
ESPN Chicago's Nick Friedell discusses Jimmy Butler's knee injury and how the team will fill his role in his absence.