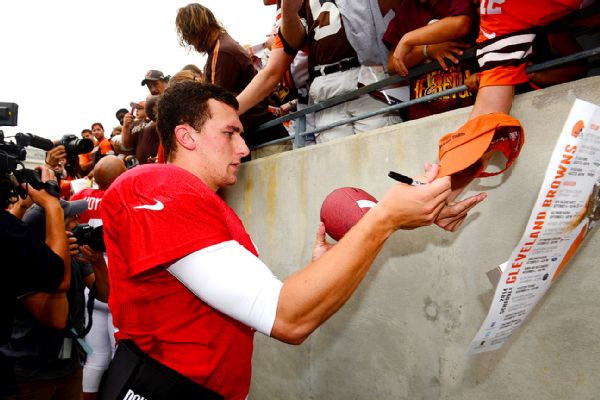 Johnny Manziel next month will make his first announced promotional appearance since leaving the NFL.

The 2012 Heisman Trophy winner, who was cut by the Cleveland Browns last March, will sign autographs in two memorabilia shops at Texas malls during Super Bowl week.

The memorabilia stores, Stadium Signatures, will host Manziel in their mall location in Katy for an hour Feb. 2, and then again the next day in Woodland.

The price is $99 for any item signed, $99 to take a professional photo with Manziel and $50 for a selfie or any picture taken with a fan's phone.

Manziel also will add inscriptions, including "Johnny Football," for $29.

Cynthia Gaytan, who manages the stores, said she has received plenty of interest in the signing from a variety of demographics.

Gaytan said Manziel won't sign anything that isn't universally thought of as "appropriate."

There's a fairly large contingent of people who collect signatures from Heisman winners, and Manziel's fading from the public eye made him a nearly impossible get in the past year.

His father told the Dallas Morning News last February that if his son didn't get help, he feared he wouldn't live to his 24th birthday, which Manziel celebrated last month.

Manziel, who was selected by Cleveland with the 22nd overall pick in the 2014 NFL draft, spent 10 weeks in rehab after his rookie season. He was suspended for the first four games of the 2016 season for violating the NFL's substance-abuse policy. Manziel faced the threat of an additional suspension as the NFL investigated whether he violated its personal conduct policy. But his 2016 season effectively was ended in March, when the Browns released him.

Manziel, last month, also reached an agreement with the Dallas County district attorney's office to have his domestic violence charges, brought when he was accused of hitting his former girlfriend, dropped should he reach certain conditions throughout the year.

Manziel lost his endorsement deals, including one from Nike, and he wasn't renewed by Panini, which had his exclusive autograph deal.