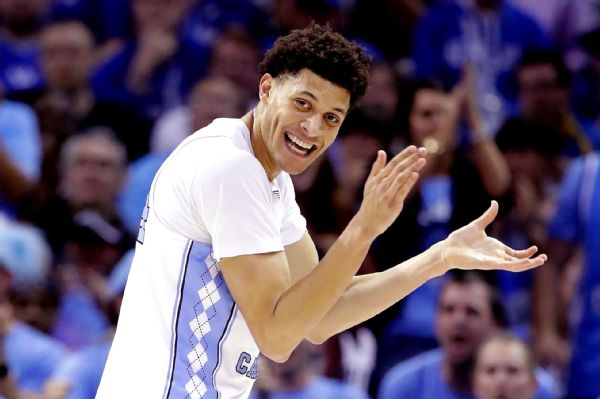 North CarolinajuniorJustin Jackson has decided to declare for the NBA draft and sign with an agent, forgoing his final season of college eligibility.

Jackson tested the NBA draft process a year ago, but he decided to return to Chapel Hill, where he helped lead the Tar Heels to the national title. He also significantly improved his NBA stock, going from a likely second-rounder to a possible lottery pick, according to several NBA executives.

ESPN Insider Chad Ford rates the Atlantic Coast Conference player of the year as the No. 27 player on his list of top 100 draft prospects.

"I thank God, my coaches and teammates and the University of North Carolina for giving me this extraordinary opportunity," Jackson said in a statement released Thursday morning. "My family and I discussed my decision with Coach [Roy] Williams and we agree that declaring for the NBA draft is best for my career.

"I wouldn't trade anything [from] the last three years as a Tar Heel, especially getting the chance to win a national championship, which was unbelievable. I feel I made a good decision last year to come back for my junior year. That has put me in a much better position as a basketball player and a person. I'm proud to know I will always be a Tar Heel."

Jackson, a 6-foot-8 forward, led the Tar Heels in scoring at 18.3 points per game. He also set the school's single-season record with 105 3-pointers. He was told by NBA personnel a year ago to improve his shooting range; he went from shooting 29 percent on 3-pointers as a sophomore to 37 percent this season.

"We're excited for Justin and proud of the way he conducted himself each day in leading our team to a national championship," Williams said. "Justin explored his draft options after his sophomore season but understood it was in his best interest to play another season of college basketball, and what a year it was for him and our team.

"He did what our coaches and the NBA people advised him to do -- get stronger and work on making more shots. He responded by investing a tremendous amount of his time in the offseason and came back to school a bigger, better and more confident player."

The Tar Heels will lose at least three of their top four scorers with Jackson joining departing seniors Kennedy Meeks and Isaiah Hicks.