Kevin Love: OK for Game 5 despite injury from stepping on ref's foot 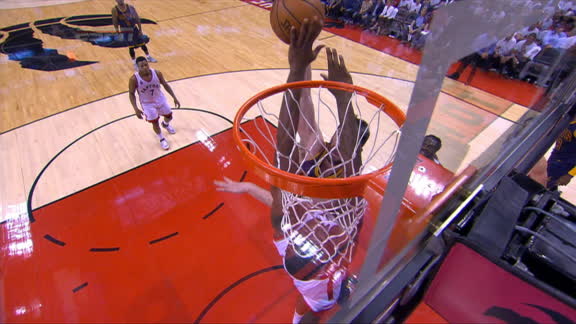 TORONTO -- Cleveland CavaliersforwardKevin Love said he hurt himself when he stepped on a referee's foot near the end of the third quarter, before he sat out the fourth quarter for the second straight game Monday in a Game 4 loss to the Toronto Raptors.

Love, who struggled in both losses in Toronto, missed 10 of 14 shots and had only 10 points as the Raptors held off Cleveland 105-99 on Monday night to even the series at 2-2. Love said his knee injury will not prevent him from playing in Game 5 on Wednesday.

"I thinkKyrie [Irving] was shooting towards the end of the third quarter, and I stepped on the official's foot, and it didn't feel too great," said Love, who had a total of 13 points and 11 rebounds in Games 3 and 4. "More so the knee [than the ankle hurting].Will be sore tomorrow, but nothing that will prevent me from playing."

In Game 4, Love missed five of his first six 3-point attempts. He started to liven up after halftime, with five points and five rebounds when he played the entire third quarter.

But coach Tyronn Lue opted to stick with Channing Frye after Frye made three 3-pointers early in the fourth quarter, when the Cavaliers erased an 18-point third-quarter deficit and took a 92-89 lead with 6:04 left. Frye finished with 12 points on 4-of-8 shooting, all from 3-point range.

Asked about Love limping at the end of the third quarter, Lue said, "I'm not sure of his health. But it's no concern. I thought Channing came in and gave us a great lift.

"And like I said, like last game, to just try to put Kevin back in with four minutes to go in the fourth quarter in a hostile game, hostile environment, it's not fair to him."

More than anything, the Cavaliers need Love to rediscover the form that helped them win their first 10 postseason games.

Love averaged 18.4 points and 10.9 rebounds and shot 44.9 percent from behind the 3-point arc in the Cavaliers' first 10 wins this postseason. During the Cavaliers' second-round sweep of Atlanta, Love was a 3-point wrecking ball, making 19 in the series.

But his shot did not make it over the border into Canada. Love missed 8 of 9 shots and scored only three points in a Game 3 loss to the Raptors. Love also did not play in the fourth quarter of that game.

Love said he was ready to return if needed in the fourth quarter Monday night.

"I had a lot of great shots, I just didn't knock them down," Love said. "It's as simple as that. I had a lot of confidence in shooting the ball, a lot of really wide-open 3s, especially to start that first quarter. A number of them went in and out, so I just need to continue to stay aggressive."

"I don't think I've been to the foul line in both games," said Love, who had 13 free throw attempts in the first two games of the series in Cleveland. "That's something that I just need to keep telling myself and feel good."

Love: I'll be sore tomorrow, but I'll be fine
Kevin Love recounts stepping on an official's foot in the third quarter, which prevented him from playing in the fourth quarter of the Cavaliers' Game 4 loss to the Raptors.