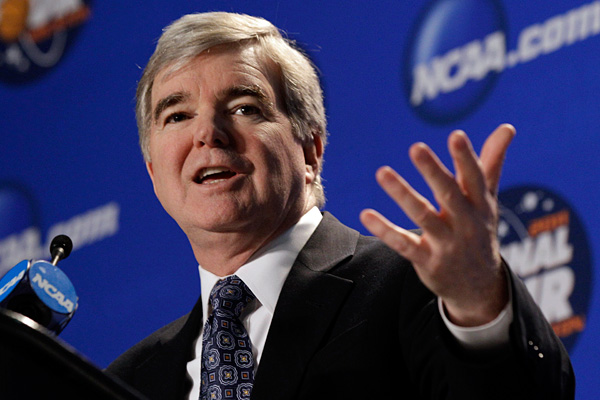 "I was reading today where someone who played basketball at LSU was very unhappy with the one-and-done rule," Emmert said Wednesday, according to the Baton Rouge Advocate. "That's not our rule. That's the NBA's rule. But [he says] it's another stupid NCAA rule."

Emmert said he has been outspoken in his displeasure with the one-and-done rule.

"It makes a farce of going to school," Emmert said. "But if you just want to play in the NBA, you can do that. You can go to Europe or play at a prep school until you're 19.

"I'd love nothing more than for the NBA to get rid of that rule. We've made it really clear to the players' union and the leadership of the NBA that we very much would like it changed."

In his new Showtime Sports documentary, Simmons said he was "wasting" his lone year of college by being asked to attend class.

"The NCAA is really f---ed up," Simmons said on "One and Done," a film that will air on Showtime on Friday night. "Everybody's making money except the players. We're the ones waking up early as hell to be the best teams and do everything they want us to do and then the players get nothing. They say education, but if I'm there for a year, I can't get much education."

Emmert said aspiring pros who choose to spend a year in college need to commit to the academics aspect as well.

"If someone wants to be a pro basketball player and doesn't want to go to college, don't go to college," he said. "We don't put a gun to your head. First and foremost, it's about being a student at a university.

"... Those kids have to be students. Philosophically, they have to be representatives of the university, so what we can and should be doing, which what we are doing today, is provide them with everything they possibly need to make them successful students and athletes."

Emmert made his comments at LSU's inaugural Sports Communication Summit at the Manship School of Mass Communication. Emmert served as LSU chancellor from 1999 to 2004.

Bad look for Simmons to sound off on NCAA?
The Around the Horn panel shares their thoughts on Ben Simmons' comments on the NCAA and his time at LSU.
Related topics:
sportsespnmark emmertben simmonsone and donelsu tigersphiladelphia 76ersmens college basketball
Copyright © 2020 ESPN Internet Ventures. All rights reserved.
More Videos
From CNN Newsource affiliates
TOP STORIES