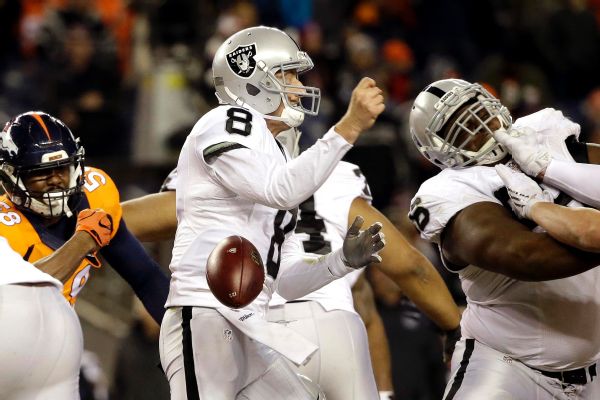 ALAMEDA, Calif. -- Saying it was an "easy option," Oakland Raiders coach Jack Del Rio announced Wednesday that rookie Connor Cook would start at quarterback over the injured Matt McGloin for the Raiders at the Houston Texans in Saturday's wild-card playoff game.

Del Rio pointed to Cook's performance in a relief role at the Denver Broncos on Sunday. In the first action of Cook's NFL career, he passed for 150 yards and a touchdown with an interception and a lost fumble while completing 14 of 21 passes. Cook went in late in the first half after McGloin injured his left shoulder on a late hit by Jared Crick.

"He played pretty well when he went in and Matt's hurt," Del Rio said. "We're hoping to get Matt healthy enough to be in a backup role. Right now, that remains a question.

"I would say the most impressive thing was when he went into a very difficult set of circumstances, and I thought he handled himself extremely well. I thought the poise was there. The moment didn't look too big for him. I thought he did a real nice job leading the team down and moving the ball. We're looking forward to playing as a team. What happens is that position gets so much attention, understandably. For us, it's about letting one young man do his job, and the rest of us worry about ours."

With NFL MVP candidate Derek Carr out with a broken leg, suffered in the fourth quarter of Game 15, Cook will become the first QB in the Super Bowl era to have his first career start come in the playoffs.

"You always have the nerves leading up to the game, and once you get out there, you have a couple snaps and you get hit, get knocked down. Then all of that stuff kind of goes away and you start to play ball. Obviously, playing at Michigan State, we played in some big-time games there. We were fortunate enough to do that. So, I'm going to try and take whatever I did there, use it, put it to use out there Saturday."

Cook was the Raiders' somewhat surprising fourth-round pick this spring, No. 100 overall, after Oakland traded up to draft him. He was the seventh quarterback taken after a four-year career at Michigan State, where he threw for 9,194 yards with 71 touchdowns and 22 interceptions.

"It goes a long way, it certainly does," Del Rio said. "All the reports of how he handled himself, what he did on very little preparation last week, was impressive. He played in a big-time conference and won a lot of games, very successful. All of that in the background is very good for him and for us.

"I think there's a lot of unknown there, right? I think we'll get to watch it play out. Let's see him play. Honestly, we haven't seen him a lot. We saw half a game, or thereabouts, against Denver last week. That was pretty good. That part was pretty good. Small sample [size]; pretty good. We get a chance to just let him go be himself."

Todd Marinovich is the only Raiders rookie quarterback to ever start a playoff game, according to ESPN Stats & Information research. He threw four interceptions in a 10-6 loss to the Kansas City Chiefs in the 1991 postseason.

Cook, meanwhile, impressed his receivers, even as left tackle Donald Penn said after the Denver game it was the first time he had ever heard the rookie's voice in the huddle. Defensive tackle Dan Williams joked with Cook on Wednesday, saying he did not realize Cook was "that quarterback from Michigan State" he watched in a bowl game.

"He's tall; he can see the field," Amari Cooper said of the 6-foot-4 Cook, who is an inch taller than Carr and three inches taller than McGloin.

"He's just confident out there. He was just ripping them, making throws, stepping up in the pocket."

Cook said his confidence has improved since training camp in Napa, California.

"I think I've always been ready to go in if they needed me," Cook said. "There's still so much to learn, so much for me to improve on. Watching Derek play, watching Matt play, they do a lot of things that I need to get better at. Watching them, if they ever needed me, I think that I would be able to go in and contribute.