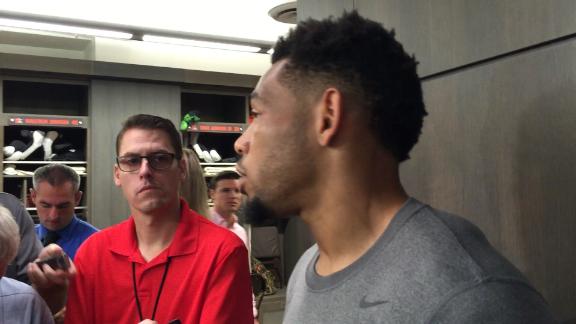 BEREA, Ohio -- Robert Griffin III was voted one of the Cleveland Browns' captains by his teammates on Wednesday, a departure from how the quarterback was viewed with the Washington Redskins, where he had a reputation for not being a team player.

The captains will be permanent for the 2016 season. Cornerback Joe Haden called Griffin "a super team-first guy."

"Doesn't feel like there's [any] reason to have anybody walking around and not talking to everybody. That's really special. I think that's why the team picked him as a captain."

Griffin said he was "extremely happy" to be chosen.

"Not satisfied, but happy with where I'm at, the opportunity that's been blessed upon me and being here with these guys, it's really a blessing," Griffin said. "I can't speak enough about how this [locker room] has been awesome.

"I've been able to grow as a player and as a leader in this locker room."

Browns coach Hue Jackson said that he didn't expect the results of the vote.

"I'll be very honest with you: I was surprised," the first-year coach said. "Because obviously Robert hasn't been here very long, and we haven't played a real football game yet. For him to be voted captain, he should feel good about that. His teammates feel good about him.

"The testament of Robert being named captain is that it came from his teammates. They voted on it. Coaches had nothing to do with this; this was all his teammates. So obviously he's embedded within the organization and his team, his teammates. I think he's shown them he's somebody they can depend on and look to."

Griffin was twice named a captain with the Redskins -- midway through the 2012 season and for the entire 2013 season. He was not a team captain in his final two seasons in Washington.

On Sunday in Philadelphia, Griffin will make his first start and play his first down in a regular-season game since Dec. 28, 2014, when he started for the Redskins in a 44-17 loss to Dallas.

"Just excited to go out and play with these guys," Griffin said. "We have an opportunity to do something special. Everyone has the same goal at the beginning of the year, and that's to win every game, and we're no different."

Griffin was the second overall pick in the 2012 draft and had an excellent rookie season. By 2015, he was not considered a great teammate and did not play a down. Jackson gave him a chance to revive his career in Cleveland.

Redskins all-time great Darrell Green had some harsh words this week for Griffin, who is separated from his wife and is now dating Grete Sadeiko, a heptathlete from Florida State. Griffin told cleveland.com in August he intended to file for divorce. Green said on 106.7 The Fan in Washington that Griffin is "selfish and childish, the way he's operating."

"I don't appreciate his moral stance, what he's doing with his wife, his kids," Green said Tuesday.

Green added he would be surprised if Griffin succeeds in Cleveland.

"I make sure I don't focus on those things," Griffin said of Green's comments. "That's the first time I've ever heard of that. That's not my job. For Darrell, a guy that I know personally, that's his prerogative. Whatever you say in the public sphere you have to make sure you're ready to say that in the private sphere as well.

"Darrell hadn't approached me about anything. I considered him a friend, so that's disappointing. But it's nothing that I can control."