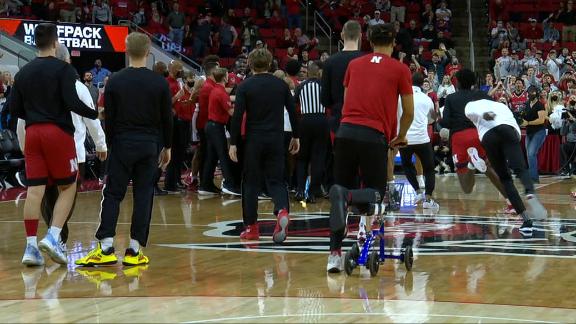 The 39 points was also a record for the Big Ten-ACC Challenge.


That Seabron, who played 57 minutes, scored four of those points, for the lead and the win, in the last 44 seconds of the wild affair was fitting. He had scored the tying points for the Wolfpack (6-1) in regulation and the the first overtime, and had scored go-ahead points near the end of the second overtime in a game that saw 14 ties and 13 lead changes.

The four-OT game was a first in the Big Ten-ACC Challenge history.

Ebenezer Dowuona scored four points for the Wolfpack but blocked a career-high eight shots. N.C. State had 11 blocks in all.

Alonzo Verge scored 25 points for Nebraska (5-3) before fouling out in the final seconds. He had traded big, last-minute baskets with Seabron throughout the game's six periods. Freshman Bryce McGowens added 24 points and nine rebounds.

The game saw tempers flare late in regulation when players traded words, bumps and shoves in front of the Wolfpack bench right after Jericole Hellems launched a corner 3 over Lat Mayen as N.C. State erased a 14-point deficit to tie at 61-61.

As the dust settled, Mayen was ejected on a flagrant 2 foul and N.C. State's Cam Hayes was ejected as well.

In the first overtime, the teams combined to miss the first 11 shots, and there was no scoring until there was less than a minute in the period when the Huskers and Wolfpack flew up and down the court trading baskets.

Verge drove for a game-winning basket as time was expiring in regulation only to have it blocked at the rim by freshman Breon Pass, sending the game to overtime.

Nebraska is at Indiana on Saturday to open Big Ten Conference play. N.C. State entertains Louisville on Saturday in an ACC opener.