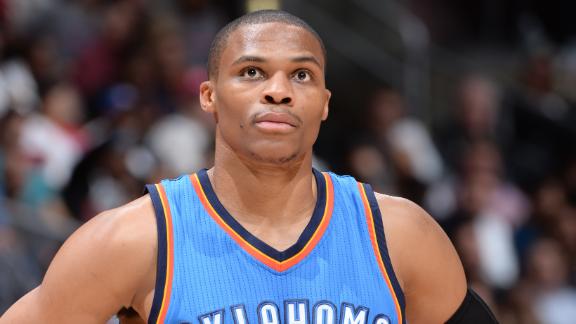 OKLAHOMA CITY -- Already playing without league MVP Kevin Durant, the Thunder now will likely have to maneuver through the difficult Western Conference without both their stars until at least December.

According to general manager Sam Presti, Russell Westbrook underwent further evaluation by outside consultants on his fractured right hand Friday and the process will continue Saturday. Westbrook remains without an official timetable as the team weighs the possibility of a procedure to repair his hand.

"At this stage, surgery is a consideration for this particular injury," Presti told ESPN.com. "If there were to be a procedure, we would provide a time frame at that point."

Westbrook suffered a small break in his second metacarpal in the second quarter of the Thunder's 93-90 loss to the Clippers on Thursday. He injured the hand by inadvertently hitting teammate Kendrick Perkins' elbow while going for a rebound. Westbrook played only nine minutes and scored two points. The previous night, though, the Thunder's All-Star point guard was magnificent in his first game filling the void of Durant, scoring 38 points in 33 minutes in a loss to theTrail Blazers.

The Thunder have been battling a wave of injuries, finishing Thursday's game with only eight healthy players. Currently sidelined are Westbrook, Durant (foot), Mitch McGary (foot), Anthony Morrow (sprained MCL), Reggie Jackson (ankle), Jeremy Lamb (back) and Grant Jerrett (ankle). However, the team is optimistic both Lamb and Jackson can return in the upcoming week.

The Thunder are considering applying for a league hardship exception, which would allow them to sign an additional player to the roster because at least four players are out with injuries for a minimum of two weeks. Currently, Durant, Jerrett, McGary and Morrow all qualify. With Westbrook now likely ruled out, the Thunder then could apply for an additional hardship exception.

In order to qualify, an independent physician with the NBA has to render a judgment on the return to play and how those players' returns would fit into the period of time the team would need the exception.

"We're certainly looking into it," Presti said. "But by the same token, we have to assess not only the needs on the roster, but when the players would return and how to best maximize the group that we have and our ability to get our players back healthy."

Teams can't apply for an exception until the players miss at least three games, meaning the Thunder can't make their application until after Saturday's home opener against the Denver Nuggets. Once Westbrook misses a third game, the Thunder then could apply for a second exception following their game against the Toronto Raptors on Nov. 4.

Considered a preseason title contender, the Thunder have played only two games, and yet it feels like their postseason future could already be hanging in the balance. They sit at 0-2 having played competitive games on the road against top-tier Western Conference playoff teams, but the possibility of at least a month without their two superstars casts a heavy amount of doubt.

"I think one thing that's important is to take a step back and recognize there are certain things that are out of our control," Presti said. "What we do here on a day-to-day basis is take purposeful action on the things we think will best help us improve and get better. The circumstances that we're being presented with right now are temporary, and it's our job to eliminate the dramatics and harness our mentality and make sure that we're productively using the time so that when those guys do come back and we start to get our full complement of players, we have built a collective mentality and momentum that's only going to be accelerated when we get our group together."

The Thunder, who made only one free-agent signing in Morrow, were relying upon the internal development of a number of young players to help push the team to the next level, even before the rash of injuries. Now, they will be looking to the likes of Perry Jones (who scored a career-high 32 points against the Clippers), Andre Roberson and Steven Adams to stabilize them in the present.

"I think perspective is really important. We're certainly not ignoring the reality that it's a unique situation, but this is when our organization is at our best," Presti said. "This is the reason we've always tried to target and procure character, work ethic and humility in our players. Because these are the periods of time that those types of qualities are revealed. And I have a lot of confidence that we're going to find a way to keep our march moving forward and be ready when we get back to full strength to make an impact. We're not sitting around waiting for the storm to pass. We're marching forward."