WTVD
By LA Blake
Every Olympics, superstars emerge that have everyone talking.

Sometimes it's for their performance; sometimes it's their charisma. Usually it's a magical combination of the two.

No matter your knowledge of the sports, these Team USA members are sure to win you over.

Monique Lamoureux-Morando and Jocelyne Lamoureux-Davidson, mirror-image twins from North Dakota, dominated the ice during the gold medal women's hockey gold medal match. Monique not only watched Jocelyne score the winning goal that secured the gold for the U.S. over Canada, she did so after she herself had scored a goal to tie the game.

"It's been a lot of fun playing with Jocelyne; we always have that familiarity and that chemistry when we are on the ice together so to be able to bring that to showcase it at the Olympics has been pretty special," Monique told ABC News.

The gold medal from Pyeongchang is especially sweet for the Lamoureux sisters, who won silver in Sochi and Vancouver. It was also redemption for Sochi, when the team lost to Canada in sudden-death after having been up by two goals in the gold medal match.

"It's tough to put into words -- we've literally been training four years for this one game," Monique said before the game. "We have done everything we can as a team to be successful and hopefully we get the result that we we've been working for four years."

"We have pushed each other since we were little and our brothers have kicked our butts along the way," Jocelyne said. "It's been a dream come true to do this."

The two members of the U.S. women's team in the cross-country final made it clear who they were skiing for: each other. Jessica Diggins said Kikkan Randall was at the top of her mind as she came from behind to snag the gold in the final lap.

"In the final stretch, I was just thinking, 'Go, go, go, I'm giving it everything I had and I've got someone who I really love and care about waiting for me at the finishing line and I just want to make her proud,'' Diggins said.

Randall, 35, was competing in her fifth and final Olympics.

"If there's anybody I'd have 100 percent faith in coming down that finishing stretch as fast as possible, it's Jessie. So that was just a wonderful feeling to take it all in and watch it happen," she said of Diggins' final lap.

Randall also happens to be the only mom on Team USA this year, which made some fans (including skier and four-time Olympic medalist Julia Mancuso) even happier for her.

About to go to sleep just amazed at @kikkanimal and @jessdiggs you ladies freaken rock! That was so incredible and WOW. Kikkan- a mom at your 5th #Olympics now I will 💤 inspired:)

Though 17-year-old Chloe Kim said she just thinks of herself as a girl from Southern California, the Korean-American has become a sensation in both the U.S. and in the country where her family is from after taking home the gold in the women's halfpipe.

The teen got fans giggling when she tweeted about being "hangry" and wanting ice cream while she was competing.

Could be down for some ice cream rn

In the end, though, it was her incredible performance that sealed her place in U.S. Olympics history. With her family watching in person, Kim said her real aim was to make them proud by doing her best.

"I knew I wasn't going to be completely satisfied taking home the gold, but knowing that I could've done better," she said.

I hate crying but I'll give myself a pass for this one. Thank you everyone for the love! Stoked to bring home the gold pic.twitter.com/vxApf1lxbI

At two months younger than Kim, Gerard is the youngest person to ever win a snowboarding gold medal for Team USA. The Colorado resident, who has a makeshift snowboard park in his backyard, took home the gold in slopestyle.

The teen pulled it off even after oversleeping and not being able to find his jacket on the morning of the competition. Instead, he borrowed the jacket of teammate Kyle Mack.

"He was a lifesaver. It was crazy. I would have been done-zo," he said on Jimmy Kimmel Live. "It was a really hectic morning. It was something else."

Gerard had quite the sense of humor on his Kimmel appearance, joking around about his family members partying in South Korea (which they call "getting Gerarded") and agreeing with Kimmel that he has the rest of his life to disappoint.

Rippon, though, finished with a lower score than his Russian and Canadian competitors, even though they both fell during their routines and Rippon did not. This led to something of a social media outcry, with fans declaring that Rippon got ripped off.

Did Adam Rippon get ripped off? How on earth did he place behind the guy that fell?!? pic.twitter.com/BLJ1kVM21t

"I think we need to get those people who think that I was ripped off on a judging panel immediately, maybe before the individual competition," Rippon joked to ABC News.

Rippon and skier Gus Kenworthy have also made headlines for being the first openly gay athletes to compete for the U.S. in the Winter Olympics. Asked about tensions between him and Vice President Mike Pence, Rippon said he wants the story to be about the competition for now.

"I have no problem talking about what I've said because I stand by it, but I think right now the Olympics are about Olympic competition and the athletes involved," he said. "I don't want it to distract from them, and I don't want my Olympic experience to be about Mike Pence. I want it to be about my amazing skating and being America's sweetheart."

Speaking of U.S. athletes who can pull off the notoriously difficult triple axel, Mirai Nagasu also proved herself with the jump. During the women's free skate, the 24-year-old Southern California native became the first American woman to land it during the Olympics. Like Rippon, Nagasu didn't make the team in 2014, but like Rippon, Nagasu didn't let that get in the way of her performance during the team competition.

The triple axel was the first jump in her routine.

"I was very, very nervous, especially because this is the team event. I owe it to my teammates as well," she said. "I don't know if you could tell -- it was more something I could feel -- but to nail it the way I did, even out of the corner of my eye, I could see my teammates standing out of excitement."

To top off the excitement, Nagasu had a Twitter exchange with one of her heroes, Reese Witherspoon.

I watched Home Again on the way to the Olympics and I know it’s a movie but I wished you were my mom. You’re my hero. ❤️ https://t.co/LRHEMEXroE 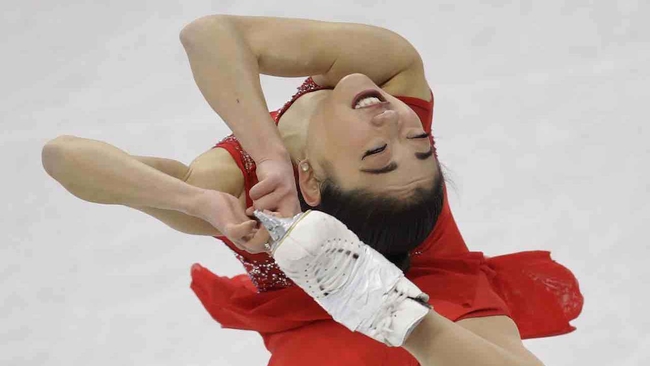