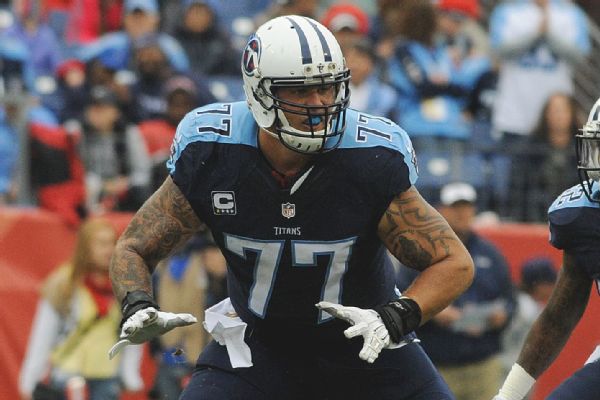 The Titans were upset when Green Bay Packers nose tackle Letroy Guion jumped across the line and knocked quarterback Marcus Mariota on his back prior to the snap. In the ensuing scrum, Lewan swiped awaythe hand of back judge Steve Freeman, drawing the flag and the ejection.

"I thought it was the right call. Taylor should not have been where he was. He should have been back in the huddle," coach Mike Mularkey said after the Titans' 47-25 victory.

Lewan has played very well for the Titans this season. On the Titans' first play from scrimmage Sunday, he blocked a defensive lineman and safety Ha Ha Clinton-Dixto help springDeMarco Murrayfor a 75-yard touchdown run.

"I've said in the past, I'd go to war with Marcus," Lewan said. "Seeing your quarterback getting hit with nobody taking off [from the line] is a huge, unspoken no-no in the NFL. So I got in the guy's face and someone's hands were on my chest. And I didn't even know I did until the review, but I swiped his hands away and it happened to be the official, and that took me out of the game.

"That's something that is not OK, but I've said before I'm going to fight for Marcus every chance I get, and that is something I will always do. ... Regardless of any situation, I need to be responsible for my actions."

Lewan said he begged referee Jeff Triplette not to send him off the field for good. As he headed for the locker room after his ejection, Lewan held up his middle fingers while shouting at the officials and tossing a glove over his head and into the crowd. He said the locker room was a quiet place where he had a long time to digest what unfolded.

Mariota said he appreciated Lewan defending him, but said the whole team can do better keeping its collective head in such moments.

Lewan was replaced by Dennis Kelly, a tackle the Titans received in exchange for receiver Dorial Green-Beckham in a preseason trade.

As the Titans walked off the field after the win, Lewan -- in flip-flops, shorts, a sweatshirt and a backward ball cap -- greeted some of his teammates at the corner of the field near the tunnel.

Lewan's ejection is the 11th disqualification of a player from a game this season. There hasn't been more than 13 players ejected in one season since at least 2001, the first year in which ESPN has collected data for its penalty database.