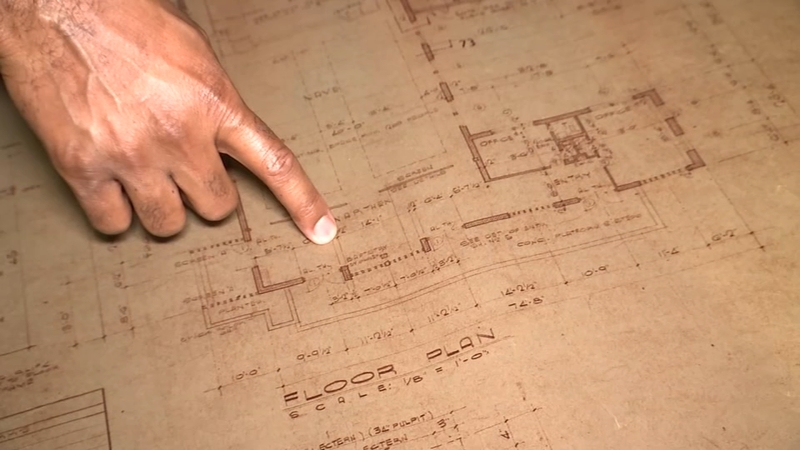 RALEIGH, N.C. (WTVD) -- As St. Ambrose Episcopal Church in southeast Raleigh prepared to celebrate its 150th anniversary last year, its rector uncovered a big piece of history tucked away in his office closet.

Father Jemonde Taylor was cleaning out the closet and a worn cardboard box tucked away in the corner when he found the church's only surviving copy of blueprints.

On Wednesday, ABC11 was there as Taylor donated the documents to NC State University Libraries.

"It was a treasure trove," Taylor said. "Not only these blueprints, but also the pictures that go along with the construction."

The church on Darby Street in southeast Raleigh was built in 1965 and designed by Leif Valand.

"He was a very prolific architect," said Gwynn Thayer, Assoc. Head and Curator of Special Collections at NC State University Libraries. "And he's really most known for his work in Cameron Village in the late 1940s."

Thayer said when she and her team of curators heard about the discovered documents, they came to St. Ambrose right away.

"We were very excited to hear about this because a lot of Leif Valand drawings are gone," she said.

St. Ambrose was founded in 1868, originally located at Lane and Dawson Streets; in 1900 the building was moved to Wilmington and Cabarrus Streets before it was torn down.

Valand highlighted features of the church's latest design to echo its rich history.

Taylor said he isn't letting go of this piece of history he found, but rather granting access to more people who would have never been able to see it otherwise.

For St. Ambrose, the blueprints serve as another symbol.

"Christianity is big with symbols," Taylor said. "One of the major symbols being the cross. And to have symbols like these as touchpoints of where we've been that people who were faithful who gathered and prayed in this place had the vision and forethought to raise money and recruit architects to build where we are today. It's a touchpoint of our history and realizing that we did not get here without those that came before."
Report a correction or typo
Related topics:
societyraleighnc state universityhistorychurch
Copyright © 2021 WTVD-TV. All Rights Reserved.
TOP STORIES
Uber adds new safety feature for Raleigh, Durham riders
LATEST: COVID positivity rate above 9% for second time in 2 weeks
Reaction after money in walls of Lakewood Church, which Osteen heads
NC Chinese Lantern Festival seeing record attendance
Major outage hits Amazon Web Services; many sites affected
Mark Meadows to halt cooperation with January 6 committee
Show More
Amber Alert issued for 1-year-old Randolph County girl
Man found dead inside burning Cumberland County house
Toyota to build lithium battery plant in NC
50 mutations in omicron could be its downfall, data shows
Why feds are warning it could take months to get a passport
More TOP STORIES News