'Not at Southpoint': Latest mall shooting report turns some holiday shoppers away 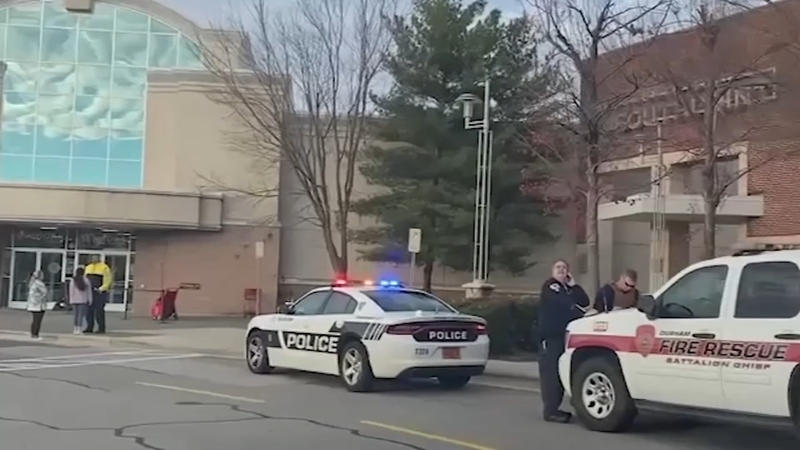 DURHAM, N.C. (WTVD) -- Durham police officers have increased their presence at Streets at Southpoint mall following the Sunday afternoon report of shots fired. On Monday, ABC11 spotted 10 patrol cars on the property, which caused shoppers to have mixed reactions.

Bobo and her cousin Nita Fowler were on a lunch date. The two were heading into Chicos, Off the Rack and a few other stores for some early afternoon Christmas shopping.

"But not at Southpoint. So, I'll be doing some online ordering and pickup," said Fowler, a Raleigh resident.

The duo changed their plans to come to the mall after hearing news of Sunday's shooting. It's the second report of gunfire at Southpoint within weeks. An active investigation is underway as Durham Police look into a shooting that happened in the parking lot of the mall Sunday afternoon. Officers responded to a suspicious person with a weapon call, but when they arrived, there were no victims or suspects at the scene.

"That's great for this situation, but it's not a solution," said Fowler, of the increased police presence.

"Proactivity is always a good thing. It's better to be proactive than reactive. If they've already had two incidents here, they're just trying to make sure there's police presence to deter additional crime from happening," said Cary resident Chris Andrews.

Andrews is heading to Southpoint on Monday night. Given the increased police presence, he's comfortable finishing up Christmas shopping for his wife. He offered suggestions.

"I think anyone should be observant of their surroundings no matter what the situation calls for," said Andrews.

ABC11 asked Durham police how long are they planning to have more patrols and how many officers are on duty here at the mall and if shoppers should be leery as they Christmas shop.

We haven't heard back.

However, Streets at Southpoint officials announced Monday evening that a firearm-detecting canine has been added to the center's security program. The dog, named Cigan, is known among handlers for his friendly demeanor and officials said shoppers will likely be unaware that Cigan has even scanned them for firearms.

Cigan will patrol the shopping center with a security officer.

"The Streets at Southpoint welcomes millions of guests a year and provides for thousands of retail associate jobs. The center is proud to be a hub for the community, and it is a privilege that is taken seriously," the mall said in a statement.