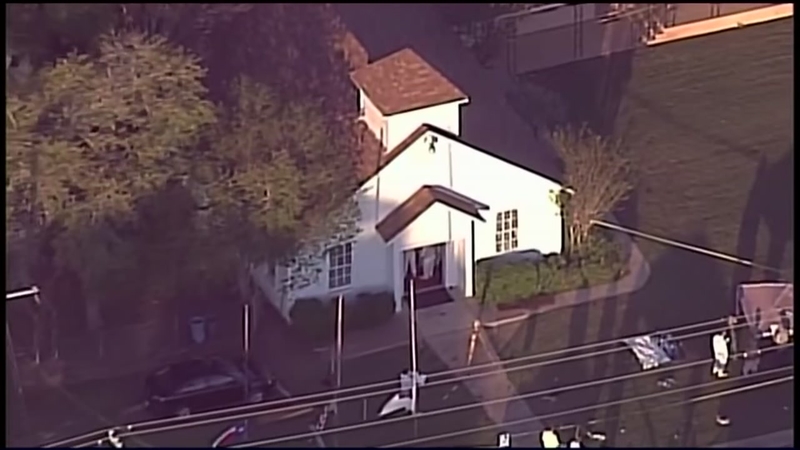 SUTHERLAND SPRINGS, Texas -- The man who opened fire inside a church outside of San Antonio called his father after he was shot during his escape and before an apparent self-inflicted gunshot, law enforcement said.

A day after the mass shooting at the First Baptist Church in Sutherland Springs, Texas, a collection of law enforcement, including Texas Department of Public Safety and the ATF, gave an update on the investigation. Twenty-six people were killed in the massacre and another 20 people were injured.

According to authorities, at least 23 people, whose ages ranged from 18 months to 77 years old, died at the church. One person had died outside the sanctuary and another two died at the hospital.

An armed resident who encountered the gunman Devin Kelley shot at the suspect as he tried to make his escape, authorities said. Kelley had dropped his assault-style rifle and was shot during this face-off.

That neighbor was able to fire two to three rounds at Kelley as he left the church. Kelley returned fire with a handgun before getting in his vehicle and speeding from the scene.

Kelley led two private citizens on a pursuit for six miles that ended with his vehicle running off the road and into a ditch. He was later found dead with what may be a self-inflicted gunshot.

A rifle and two additional handguns were recovered between the church and the suspect's vehicle. Kelley did not have a license to carry any of the firearms, according to the ATF.

Authorities confirmed that Kelley had served in the U.S. Air Force and that he was dishonorably discharged, which would result in him being restricted from firearms purchases.

Kelley bought weapons at an Academy store in San Antonio, according to law enforcement sources.

Academy issued the following statement: "Academy Sports + Outdoors sends our deepest condolences to the families of the victims and the entire Sutherland Springs community. Based on the information we received from law enforcement, we confirmed that the suspect purchased two firearms from two San Antonio locations, one in 2016 and one in 2017. We also confirmed that both sales were approved by the National Instant Criminal Background Check System (NICS). We are cooperating with law enforcement as they investigate further."

Authorities also said Kelley's mother-in-law attended the church and that there was a domestic spat between the two leading up to the shooting. It was not known if Kelley's relative was attending services when the shooting happened.

It is not believed that the shooting was racially or religiously motivated, and terrorism is not under investigation.

Wilson County Sheriff Joe Tackitt spoke with ABC11's sister station KTRK Monday morning and said 12 to 14 children were among the victims of the shooting.

"It's devastating, it's very difficult for the families," Dr. Sherri Bays, superintendent of Floresville ISD, said of the shooting at a press conference on Monday.

The superintendents of the three area school districts where the youngest of the victims attended classes or who had friends or family there came together to express their grief Monday afternoon.

Floresville superintendent Dr. Sherri Bays said the districts had joined together along with Stockdale ISD to offer additional grief counselors to students who need them.

Bays said students had expressed sadness over what happened after hearing about the deadly shooting on the news or on the radio.

School officials encouraged parents to listen to their students' concerns and to watch for signs they might be having trouble.

"It's devastating. It's very difficult for the families," Bays said, fighting back tears. "Our staff members are so upset, and these children are their children. It's been hard, but the public school community comes together and supports each other. I am confident all of our communities will be resilient."

Investigators say Kelley entered the church from the back and fired as he walked to the front.

Sheriff Tackitt says Kelley reloaded several times and had 30 round magazines. He says dozens of rounds were fired.

Work history for Kelley has been coming to light. Over the summer he worked as a security guard at a popular water park before being let go.

A spokesperson for Schlitterbahn New Braunfels issued a statement: "We, like the rest of our community, were horrified to learn of the tragedy in Sutherland Springs at the First Baptist Church. We are keeping everyone impacted by this malicious act in our thoughts and our prayers. Devin Patrick Kelley worked briefly - 5 1/2 weeks - this summer at Schlitterbahn New Braunfels as a seasonal unarmed night security guard. His employment was terminated in July. All our security guards, prior to starting with us, must pass a criminal background check through the Texas Department of Public Safety. He passed his."

Most recently Kelley was working as a security guard for an RV park. The manager at Summit Vacation Resort and RV Park said Kelley left work Saturday complaining of a headache and didn't show up for his shift on Sunday.

The sheriff has spoken with the neighbor who shot Kelley, but that man doesn't believe he's a hero. He does not want to speak publicly about what happened. Investigators say if he hadn't been there the shooter would have gotten away.

Investigators say most of the people in the church had been shot or wounded. Many of the parents attempted to shield their children from the gunfire.

JUST IN: The ages of those killed in the Sutherland Springs church shooting range from 5 to 72 https://t.co/ZZnz0ui7R2 pic.twitter.com/x0bQgdLtfN

Kelley's wife and child are safe in New Braunfels.

All of the bodies of the victims have been removed from the church and taken to the medical examiner's office.