Budd, Beasley win to set up Senate showdown in November 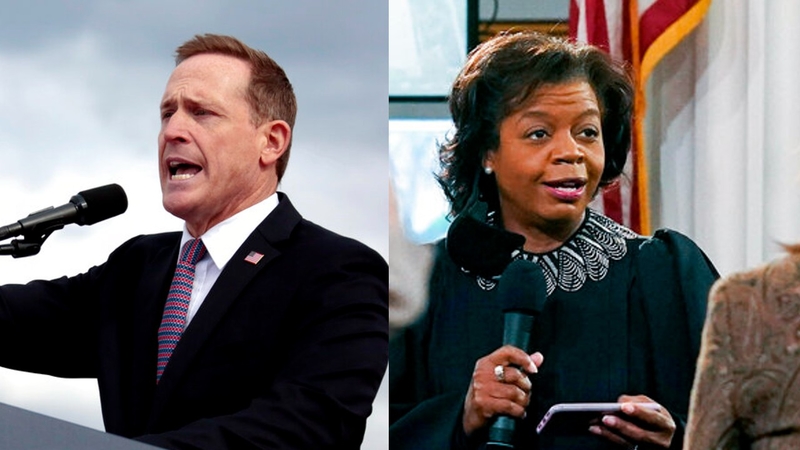 Budd, Beasley win to set up Senate showdown in November

Budd's win is also a victory for former President Donald Trump, who elevated the little-known congressman with a surprise endorsement nearly a year ago. A super PAC affiliated with the conservative Club for Growth spent millions on ads supporting Budd and attacking his chief rival, former Gov. Pat McCrory, as too liberal.

Budd credited Trump for bringing recognition to the primary fight.

"He caused people to focus on this race, pay attention to me, but at that point, you have to earn it," Budd said. "It's the single biggest factor that moved things in my direction and yes you have to put hard work on top of that, so I'm very appreciative of the whole Trump family for their support."

McCrory was considered a moderate in the 14-candidate primary but is best known nationally for signing a "bathroom bill" targeting transgender people in 2016 that led to widespread boycotts. Former U.S. Rep. Mark Walker also competed in the race.

"While I'm disappointed by the election results tonight, I'm proud of the race we ran," McCrory said in a statement. "We told the truth, championed conservative principles and results, and made character and achievement central to our message. I'll continue to advocate for the kind of Republican party that believes in truth, integrity, vigorous debate, character and achievement. I still believe in that party, and that our obligation to the next generation is more important than the next election. I look forward to participating in that conversation in the future."

Budd avoided a runoff by garnering more than 30% of the vote in the primary. He now advances to the November general election, where he'll take on Democrat Cheri Beasley, a former state Supreme Court chief justice. Beasley would be North Carolina's first Black senator if elected in the Republican-leaning state.

"I'm still the same person I was -- Ted Budd then, I'm Ted Budd now and the America First agenda wins for everybody," Budd said. "I don't think you have to change a lot. I'm still going to be the same person then that I am now.. "I have a job in Washington DC, I'm a sitting US Congressman so I'm going to continue to serve the current 13th district of North Carolina."

The former state Supreme Court chief justice defeated 10 other Democrats on Tuesday. Beasley would be North Carolina's first Black U.S. senator if she wins in November.

"I am honored to be your nominee," Beasley said in her acceptance speech. "I am so proud to be your nominee for the US Senate. As your senator I will fight to keep jobs rooted in our local communities, investing in a made-in-America economy. Ensuring that people get the job training they need for high-paying in-demand careers and creating good-paying jobs by investing in renewable energy. I will also work to support small businesses which are the backbone of our economy."

Beasley also said she would fight to lower costs.

"From the prices at the pump to prescription drug costs. I will work to expand the Affordable Care Act and Medicare," Beasley said. "To ensure that every person in every part of North Carolina will have access to the care that they need."

Beasley wasted little time in criticizing Budd, some foreshadowing of what figures to be an intense and expensive Senate race.

"My opponent has made it very clear he will not put North Carolina first," she said. "He will not fight for what we need or what we want. He will put his own ambitions and corporate special interests for his campaign over people of his state."

Budd quickly jumped on his Democratic rival as well.

"Cheri Beasley is the most radical, liberal candidate to ever run for US Senate here in North Carolina, so if we send her to Washington, she would enable every element of Joe Biden's agenda and if we think it's bad now, it's only going to get worse with Cheri Beasley in the US Senate," Budd said.

Beasley was elected to the state Court of Appeals in 2008. She was later appointed to the Supreme Court, won an election, and was named chief justice by Democratic Gov. Roy Cooper in 2019. In 2020, she lost a statewide election to remain chief justice by just 400 votes.

"I am honored to stand with all of you and on the shoulders of many trailblazers who came before to be the first African American woman to be your Democratic Senate nominee," Beasley said.

Sen. Thom Tillis, R-NC, congratulated Budd after his victory and called for party unity after a hard-fought and often contentious primary.

"Congratulations to my friend Ted Budd on winning the Republican nomination," Tillis said. "Ted is a proven conservative problem solver, and I will be doing everything I can between now and November to help make sure he is elected North Carolina's next U.S. Senator. I've said from the beginning that I had two good friends in this race and I'm grateful for Pat McCrory's service to our state and the vision he put forward during this campaign.