'The party does not stop until I take them home:' Meet the Uber driver behind the 'wildest party ride' in Raleigh 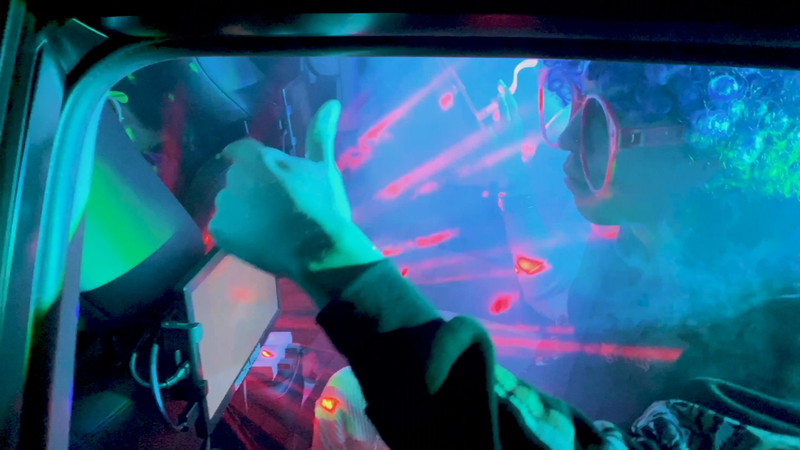 'The party does not stop until I take them home': Meet the Uber driver behind the 'wildest party ride' in Raleigh

RALEIGH (WTVD) -- "Pull up lit. Turn up the volume. Be part of the party experience." That's the motto of one Raleigh Uber driver who hopes to turn his side job into an absolute money maker.

Michael Youakim has been driving with Uber for nearly a year. And after having roughly 200 rides under his seatbelt, he got an idea: bring the "Wildest Party Ride" to the Triangle.

And thus, RideLitRDU was born.

The idea behind the ride is to keep the fun going long after the customer books a ride.

"The party does not stop until I take them home," Youakim said. "So they leave the club or their party, they get in the RideLit ride ... the music is jamming, they select their own music in the tablet, and they create that experience ... the lighting effects, music, the subwoofers, it gives people that ultimate experience."

Youakim said he was inspired by a similar car and wanted to bring the experience to the Triangle.

"You're like, 'Look at that party car. Like I want to be in it.' It makes people want to be in the car. I'm like, 'don't just glance at a distance and videotape it, you can videotape yourself in the party car having the most fun you can.' So that's what I want to bring to the people and to the community in Raleigh."

And Youakim said the party ride is enjoyed by people of all ages.

A woman about to celebrate her 79th birthday saw the car on Fayetteville Street and told ABC11 she loved the idea, and she added she would book a ride even just to go to the pharmacy.

"I learned one thing in my time: you gotta have fun," she said.

11 questions you want to ask an Uber drive

And Youakim definitely brings the fun. Every night, he dons his curly, bright blue wig, oversized sunglasses and heads out to pick up his passengers. He arrives in style with music blaring, flashing lights dancing and fog slowly seeping out of the windows.

But it's not just all of the gadgets that make for a great ride home, it's the company too.

"I stir up and hype up the crowd in the car, it just makes it that much more fun," Youakim said. "... It's like they're a star in my car, and I treat them with the VIP experience of water bottles, opening the door for them ... like I said, that is what others aren't doing. The moment they get in the vehicle, it's a whole new experience that they can experience, and the way everything is set up, it's just untouchable."

And it's an experience that riders seem to love.

"Great driver with a fun car," one review read. "Definitely the kind of guy you want to get when you're going out or coming in from a night out."

But not everyone is gung-ho about riding with a stranger.

In a time when rideshare companies are cast in a negative light, some may be a bit hesitant to use apps like Uber and Lyft. However, Youakim said while you make a request for a ride home, you don't always have to take it.

"I always say look at their information on the Uber app when it pops up, it will tell you their information," he said. "And when you meet the person make sure that it's their name ... and then just look at them. If it feels sketchy or if you feel comfortable, great, but if you don't have a slight comfortability to be in that car then just get another Uber driver."

A passenger's comfort and safety are important to Youakim.

"That's what it's really about just they are having fun, and creating a safe, fun environment in the vehicle and wherever they're going," he said.

Youakim said he plans to move away from driving with Uber and work independently.

And while he still drives for Uber, he also books rides for RideLiteRDU through his Instagram and website.

Youakim drives Uber X and Select. And since Uber drivers can't be requested, his pickups are random.

However, those booking him through his site will have to shell out a little extra dough for the party ride. Youakim said the average upcharge from an Uber ride is around $10 depending on the pickup and drop off locations.

Youakim said he plans to work with small companies to promote his business and vice versa. He plans to use his Lexus and social media accounts to promote their logos, sales, and deals.

"I want to give back to the community," he said. "I want to help small, local business owners to promote their name."

And while his days of driving with Uber are numbered, Youakim said he just feels blessed to be turning and lighting up the streets of downtown Raleigh.