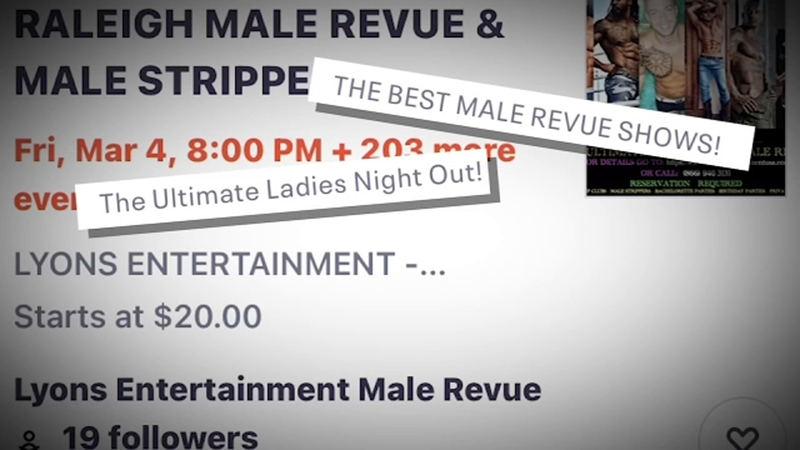 RALEIGH, N.C. (WTVD) -- It's billed as the ultimate male strip club in Raleigh. Tickets are being sold to a Raleigh male strip club, but the problem was when a group of Wake County ladies showed up for it there was no show, and they feared they were out their money.

"It's upsetting and it's a good chunk of change," Tanya Thompson said.

Thompson spent close to $500 for VIP tickets to the show. She bought 10 tickets for the show, which was a VIP table to celebrate her birthday with friends.

"We just wanted to do it up and I love to dance, so you know downtown Raleigh is a good spot for that," she added.

When it came time for the show the night of Feb. 5, the ladies were all dressed up and ready for a fun night, but when they arrived at the address advertised on the tickets the venue was closed.

"We get to Mojito Lounge and it's dark inside and the doors locked and closed," Thompson said.

There was no sign of any male strip club happening. Thompson said that a few hours later, they checked back at the Mojito Lounge, and though it was now open, no one knew anything about a male strip show.

"He said no, we have Latin night tonight," Thompson said.

After her birthday, Thompson contacted Eventbrite where she bought the tickets and the organizer of the show, Lyons Entertainment USA.

"He didn't even acknowledge any of my emails except for the one about buying more tickets," she said.

"We don't have anything to do with Eventbrite right now, we're not hosting anything through them. She responded saying, you would not believe how many women we have showing up between 7:30 and 8 p.m. on Friday and Saturday nights," Thompson said.

When the Troubleshooter contacted Mojito Lounge, a representative said they have no contract to host any shows with Lyons Entertainment and have tried to stop shows from being advertised at their address.

ABC11 investigated, and on Eventbrite, we could still buy tickets for many upcoming male strip club shows in Raleigh with tickets ranging from $20 all the way up to $400 a table. Besides in Raleigh, Lyons Entertainment USA advertises shows all across the country.

When the Troubleshooter reached out to Eventbrite a representative provided this statement:

"We ticket millions of events a year and strive to ensure our community has a safe and positive experience using Eventbrite. We are not involved in the production of the events themselves, but our Trust and Safety team helps ensure event listings comply with our Terms of Service. Our community also plays an essential role in helping to flag any concerning content on Eventbrite and we have tools in our product for people to easily report any event listing or content they believe is in violation. We review each report we receive and take swift action when necessary."

Sean Renzo, the GM of Lyons Entertainment, emailed us saying they had to cancel a few shows because they did not reach the minimum reservations, which he says is stated on the website and Eventbrite. He admitted that he had no written contract with Mojito Lounge to host any shows but claimed that he had a verbal agreement for a trial period.

Mojito Lounge said that is not true.

Renzo added that he wasn't aware of any issues and didn't intend to deceive anyone.

After the Troubleshooter started asking questions, tickets for the shows this weekend were now no longer for sale, but there are tickets for shows later this month now advertised at a different business located on West Jones Street in Raleigh.

Renzo claimed to have a verbal trial agreement with this business. A representative at that business said in an email to the Troubleshooter that "I have only recently spoken to Sean Renzo and we have spoken about moving forward with a show at our location but there is no contract as of yet and nothing is confirmed."

As for Thompson, after she said she filed a complaint with the North Carolina Attorney General's Office, Renzo did give her a full refund and apologized for the delay. On the refund, Renzo stated the delay was caused by a hack in their system.