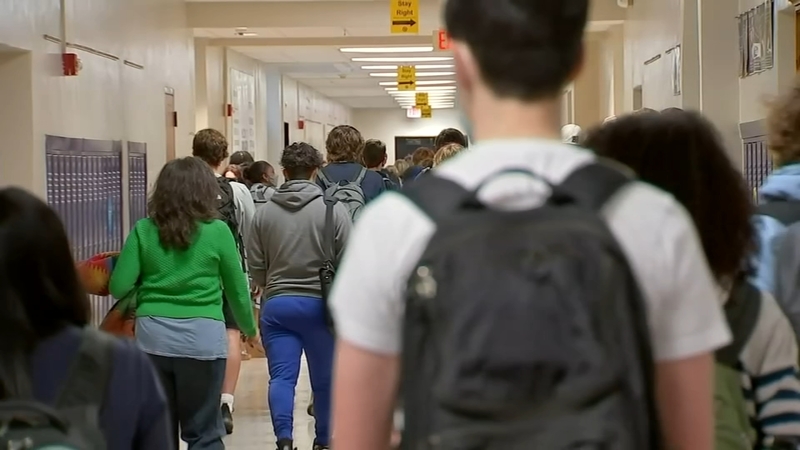 CARY, N.C. (WTVD) -- The cold war over wages for workers at your child's school has been decidedly hotter this school year. From teachers to cafeteria workers to school bus drivers, frustrations about pay have boiled over during the pandemic. That's been especially true in Wake County, the state's largest school district.

Now, as the first half of the school year is set to close -- ABC 11 is talking to staff and district leadership about the hope for labor peace in the New Year.

When Vinh Ngo walks into work every day as a special education instructional assistant at Green Hope High in Cary, he's wearing his staff badge along with his not-so-old Green Hope student ID from 2014.

Ngo's work life was thrown for a loop by the pandemic. The 25-year-old was furloughed from his job as an airline flight attendant two years ago. That's when he accepted the job at his high school alma mater. It was a big pay cut.

According to MIT's Living Wage Calculator, a single adult with no children in Wake County needs to make at least $16.20 an hour to earn enough for housing, food, medical costs, transportation. Ngo's starting salary: $13 an hour.

Ngo supplements his income with tutoring jobs and hours as a Zumba fitness instructor. That's on top of what he describes as the rewarding but emotionally and physically draining work in special education at Wake schools during a pandemic.

Even $15 per hour puts Wake school workers below the line for a liveable wage in Wake County.

A big step toward higher wages came earlier this month when the Wake school board approved a plan that guaranteed at least a $15 an hour wage for all workers.

"We are pleased to bring a compensation package this evening that increases pay for all WCPSS employees," WCPSS Superintendent Cathy Moore told board members.

The move came just weeks after hundreds of school bus drivers and then cafeteria workers, districtwide, staged a strike. It was a protest of the low pay, poor working conditions, and the major staffing shortages that were forcing existing workers to do much more.

"That has been a story in education for far too long. And so this is a step," said Lindsay Mahaffey, the newly-minted chairwoman of the Wake County School Board.

The raises include at least a 5.3% boost in pay for all support staff. The district's lowest-paid workers are getting a 40% raise.

"It's easy to think that we're all here patting ourselves on the back. And while we are excited about this, we know that there is a commitment for more to be done," Mahaffey said. She insists the district wants to pay even more -- but how?

In North Carolina, the state funds teacher base salaries, leaving it up to county school systems to supplement the pay if they're able.

Last month, for the first time in three years, the Republican-led legislature and Democratic Gov. Roy Cooper passed and signed a state budget. The spending plan boosted base salaries for school support staff to $15 an hour next school year. WCPSS voted to roll out the raise early using savings from the district's labor shortages to pay for it.

For instructional assistants, like Ngo, the district is supplementing salaries to $16.20 an hour to start. However, to make the raises permanent it will take a new property tax cash infusion from Wake County commissioners.

"We're looking at about a $13 million ask, locally, in order to maintain what we just approved," Mahaffey said.

Ngo added, "I'm happy for the raise. It's still a win for Wake County. It's a win. It's a huge win for support staff like myself. But at the end of the day, though, is still not enough."

Wake NCAE, the Wake County affiliate of the North Carolina Association of Educators is demanding a minimum of $17 an hour for support staff and a 6% increase in the local salary supplement. NCAE leaders said a $15 hourly wage is simply not enough.

On a cold night in Cary, this pair of Wake County school instructional assistants described what's had them and their colleagues boiling.

"At times, it was not eating well; worrying about how I was going to pay for my rent; going without, said Apex Friendship High IA Steve Klein. "Other times it was it was borrowing from Peter to pay Paul."

Like Klein, Michelle Craig is also an IA for children in special education. But up until a few years ago, she was the classroom teacher

"My classroom absolutely could not have run without my teaching assistants," she said. "They could do everything that I could do and they did everything that I did. They were co-teachers. They just got paid half or a third of what I did. And now that I'm in the role, I definitely see it in a different light."

Earlier this school year when Wake school bus drivers then cafeteria workers staged the sick-out, Klein and Craig did not take part. But they said they shared a similar feeling of being overworked and undervalued.

Bus driver member Tanya Nunnally enjoys her job and wants to remain a driver but she, like others, needs to be compensated fairly. pic.twitter.com/3Gk8Bb4VlD

"There's a real limitation to how long people can wait to make a living wage," said Kristen Beller, President of Wake NCAE. "We saw bus drivers and cafeteria workers whose roles are largely invisiblized by the community. People who don't often see them saw the direct impact they have on students."

If society devalues educators, it's not lost on our children. Mahaffey, the Wake school board chair, recalled a conversation with her young daughter.

"My 7-year-old said, 'Mom, I want to be a teacher, but I hear they don't make a lot of money.' She's 7 years old and already absorbed that. I just told her, hey, we're working on it. We're working really hard on it."

The Wake School Board vote, earlier this money, was the panel saying, "We see you." The board approved a sweeping package of pay raises for educators at every level. When combined with state and local pandemic bonuses in January, it amounts to what will likely be the largest paychecks of most employees' Wake County school careers.

But the bonuses are one-time payments. And the $15 minimum hourly wage is still below Wake County's $16.20 living wage for a single adult.

Pushing the General Assembly for more

Laura Horsch, a spokesperson for state Senate Pro-Tem Phil Berger, the top Republican in the chamber, told ABC11, "The state budget signed into law last month has historic levels of education funding, including a salary increase for non-certified support staff to $13 an hour this year, and $15 an hour next year. They'll also receive a $1,500 bonus."

Today, the North Carolina House of Representatives, in an overwhelming bipartisan vote of 101- 10, gave final passage to the most significant State Budget in a generation. https://t.co/IAJqkLc8bd pic.twitter.com/i28StIexUS

The NCAE argues bonuses aren't the solution. "They need that money to really be in permanent raises. And the state has billions of dollars. That is in the state coffers because they've been under-funding schools," Beller said.

Berger's spokesperson responded, "Far-left groups like the NCAE keep peddling the same tired conspiracies that the Republicans in the General Assembly are to blame while ignoring the reality that local school districts have a bigger role in setting those salaries."

Back in Cary, there is gratitude for the overdue raise. But there's also anxiety about the future.

"I used to refer to myself as the working poor. If you don't know what that is, here I am," Klein said.

Craig added, "We're not there yet. We still have a lot of work to do. I still worry, are we really attracting people when the base is now $16 to $16.20. You can still make more at Costco and Starbucks."

Wake school board chair Mahaffey said negotiations are ongoing with county commission leaders to make the raises permanent with new funding from the county.