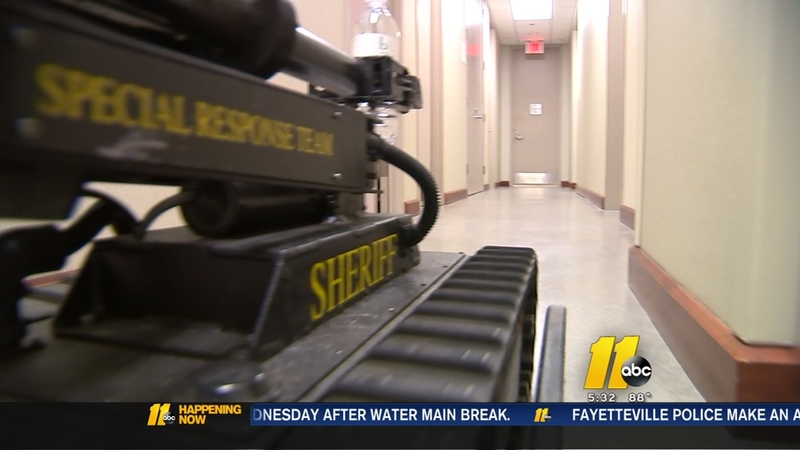 RALEIGH (WTVD) -- By all accounts, the way the Dallas Police Department used a robot carrying C-4 explosives to end a nearly two-hour-long standoff was a first. It probably won't be the last.

"Never before have we heard it used that way," said Wake County Sheriff Donnie Harrison, "but it's a perfect way of doing things."

Harrison's department has two robots similar to the one used in Dallas. One has an extension capable of raising a camera six feet off the ground; the other has a vice grip on the front and a cup-holder in the back. But as Deputy Frankie Eagles explains, a cupholder can hold many things, including a canister of tear gas.

Curious about the robot that took out the shooter in Dallas? Watch WSO roll out theirs on #abc11 tonight at 5:30. pic.twitter.com/M7ZHS2qC5O

"It keeps us from going in and having to search for someone with a gun," Eagles explained. "We send a robot in. The robot can be replaced; a police officer cannot."

Eagles has been driving robots for the sheriff's department for eight years.

"It give us the capability to look on top of a bed, or over the top of a couch that might be pushed up against a wall," he said.

Harrison says the robots are ultimately just another tool for law enforcement but says they can be critical in keeping people safe. Asked whether he would make the same decision as the Dallas chief, Harrison didn't miss a beat.

READ MORE: OBAMA: US SHOULD REJECT DESPAIR AFTER SHOOTINGS

"You've already lost some officers. You already have men down. And using these tools, robot, and anything else you have to keep people from getting killed and keep from killing people," Harrison said. "So I felt for them. They did everything possible, from what I've heard, to get this guy to surrender. Why send somebody in? My SWAT team? I would have made the same decision, I can tell you without a doubt. I would have made the same decision.

"I'm going to protect these guys," Harrison continued. "These guys have enough on their backs when they get in a house or in a building or going in the woods looking for someone who's armed. I applaud them for their work and for what they do. And if it came to it to save a life, absolutely."