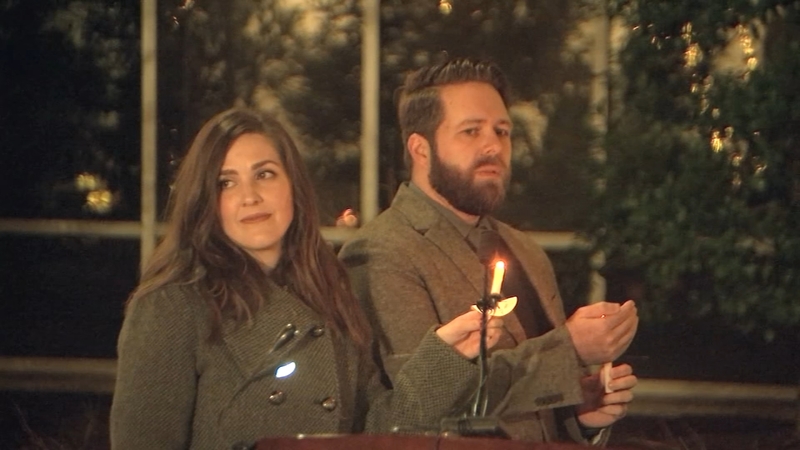 WAKE COUNTY, N.C. (WTVD) -- This is not the Christmas season that Jonathan and Stacy Holley imagined they would be having twelve months ago. But the married couple of six years stood together in the courtyard of WakeMed as the guests of honor selected to light the hospital's Love Light tree.

"January 16 was the day I found out I was pregnant," Stacy said recalling the day they were officially told they were expecting. They soon found out there would be nothing normal about the pregnancy. "We found out they were actually triplets. We were not prepared for that."

Couples have a less than 1 percent chance of having natural triplets.

It's a high-risk pregnancy. And, 22 weeks in, Stacy was in the danger zone. Her WakeMed obstetrician told her she was already dilated.

The next week at WakeMed, Stacy delivered Wright, Graham and Ford. Each boy weighed just over a pound.

4 days after the triplets were born, they were gone. And Mallory was by the couple's side for every moment.

Stacy and Jonathan Holley lit this year’s Love Light Tree at WakeMed, less than 7 mos after the passing of their newborn premature triplet boys. The couple is helping to raise money to support the hospital’s navigator program which helped them steer through the crisis #abc11 pic.twitter.com/aeM3UIQioV

"She was there and was an advocate from when we entered the hospital until we left. She even helped with the funeral arrangements. She was even the speaker at the funeral for our babies," Stacy said.
This is the first year of the family navigator program at WakeMed. Currently, it's a department of one. McKeown is the hospital's lone navigator

"It's an honor to be welcomed into their families -- that when you get to know them, meet them, you become part of their families," McKeown said.

That is the common bond at WakeMed's tree lighting/holiday party. All of the the families here have experienced loss at the hospital in some way including Colleen and Bill Lee -- who in 1985, in honor of their late son Matthew, donated what was then a young tree that's now lit every year as the Love Light tree.

"(Matthew) was involved in a car accident, ended up in the ICU and lived for 5 days," Colleen said. "(WakeMed) thought about doing a Love Light tree and said, 'Would you like to donate one in memory of Matthew,' and we said absolutely, we'll work hard to raise money for it."

Raising money is a huge part of what tonight was all about.

The WakeMed Foundation is asking donors to sponsor a light on the Love Light tree in an effort to raise $5 million this year to help expand the hospital's navigator program.