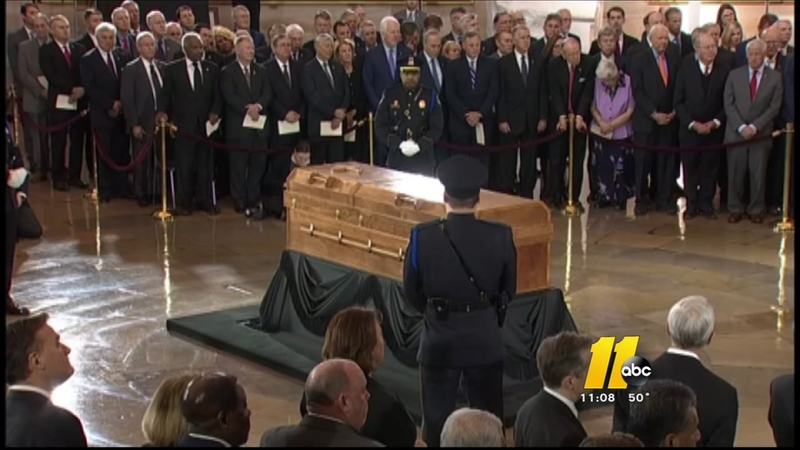 WASHINGTON, DC (WTVD) -- It was one of those rare moments in Washington where there wasn't a hint of politics - Republicans and Democrats stood side by side in the center of the Capitol to pay tribute to "America's pastor."

"Today we say a prayer for our country, that all across this land the Lord will raise up men and women like Billy Graham to spread a message of love and hope to every child of God," President Donald Trump said in his remarks to the gathering in the Capitol Rotunda.

The President and first lady stood among a room full of the most powerful people in Washington in this special ceremony marking this rare occasion - the Rev. Billy Graham lying in honor at the Capitol.

The line of people to see Billy Graham lying in honor at the Capitol started building at 5:30am. #abc11 pic.twitter.com/VplmTCEBCJ

Graham's incredible global Christian influence was on full display outside the Capitol where hundreds turned out to get in line, before dawn for a chance to see the casket in person.

"I guess growing up in North Carolina, Billy Graham was just a part of the fabric that is North Carolina," said Laura Kahn, a native of Davidson County who now works in Washington for the federal government. She took bereavement leave to come to the viewing.

"I actually got to hear him when I was 15 years old at Bank of America Stadium in Charlotte and I still remember, not necessarily the words, but how I felt - to proclaim something simply and the love of Jesus in such a simple way," she recalled.

The body of Rev. Billy Graham has arrived in the U.S. Capitol Rotunda where it will lie in honor until Thursday. #abc11 pic.twitter.com/tqgez7JjqR

Mabel Anderson, of Georgia, just underwent knee surgery three weeks ago. She arrived at the Capitol in a wheelchair pushed by her daughter. She said nothing was going to keep her from being here.

"(Graham's) example was as important as what he said. But he could speak in terms that really made us understand," Anderson said.

"My mother is the most fiercely independent and determined woman I know on the face of the Earth, and I think she probably would've come whether we brought her not. She would've found a way," she said.

Fayetteville Congressman Robert Pittenger was in the rotunda for the ceremony. Outside, he fondly recalled his memory of caddying for Graham while the famous evangelist played in the Byron Nelson Golf Classic in 1971.

"What a great tribute this is to him," Pittenger said. "When you meet (Graham) for the first time, he always looks you in the eye. He cared about people."