Las Vegas gunman was multimillionaire, according to brother

WTVD
LAS VEGAS, Nevada -- The gunman responsible for killing at least 59 people and injuring more than 500 at a crowded country music festival on the Las Vegas Strip has been identified as 64-year-old Stephen Paddock.

Paddock was found dead of an apparent self-inflicted gunshot wound.

Sources told ABC News that Paddock was armed to the teeth, with a combination of roughly 20 rifles and handguns in the hotel room. He had been staying in the room since Thursday, Sept. 28.

According to the manager of a gun store in Nevada, Paddock had purchased weapons from their shop legally. They couldn't say if those were the guns used in the attack.

"We mourn for this tragedy and our thoughts and prayers are with the families of the lost and injured," the store's general manager stated. "Mr. Paddock was a customer and purchased firearms from our store; however, all necessary background checks and procedures were followed, as required by local, state, and federal law. He never gave any indication or reason to believe he was unstable or unfit at any time. We are currently cooperating with the ongoing investigation by local and federal law enforcement in any way we can."

Paddock's brother spoke to ABC News saying the family is "crushed by an asteroid" and has no idea how or why the shooting happened. He said as authorities drill into Paddock's life, there will be nothing to be found. He was a multimillionaire real-estate investor who liked to travel to Las Vegas to play high-stakes video poker, according to the Associated Press.

Paddock was a Mesquite, Nevada resident, which is located about an hour outside Las Vegas.

During the search, a robot ripped off the garage door so that officers could enter the home. Weapons and ammunition were found inside.

Paddock had a citation through the Mesquite, Nevada, police department from several years ago. It was taken care of through the court system.

Police linked Paddock to a female companion identified as Marilou Danley, because he had her ID with him. Paddock's brother described Danley as Paddock's girlfriend and said she is a "nice lady."

After interviewing her, they determined Danley had no connection to the shooting. She was located out of the country.

He has been divorced at least twice, including marriages that ended in 1980 and 1990.

Authorities discovered that Paddock had an affinity in for guns, high-limit video poker and real estate deals. His father was a notorious fugitive bank robber.

The father Benjamin Hoskins Paddock, tried to run down an FBI agent with his car in Las Vegas in 1960 and wound up on the agency's most wanted list after escaping from a federal prison in Texas in 1968, when Stephen Paddock was a teen. 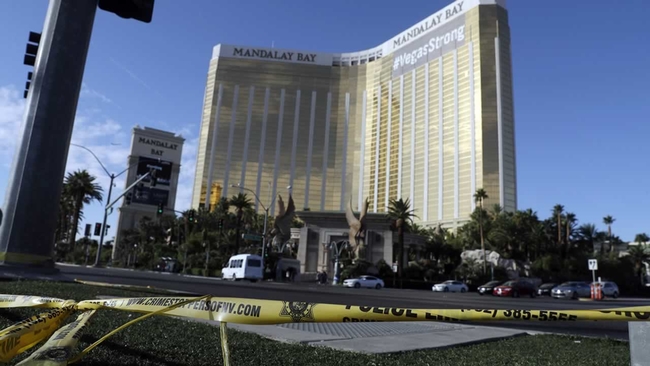