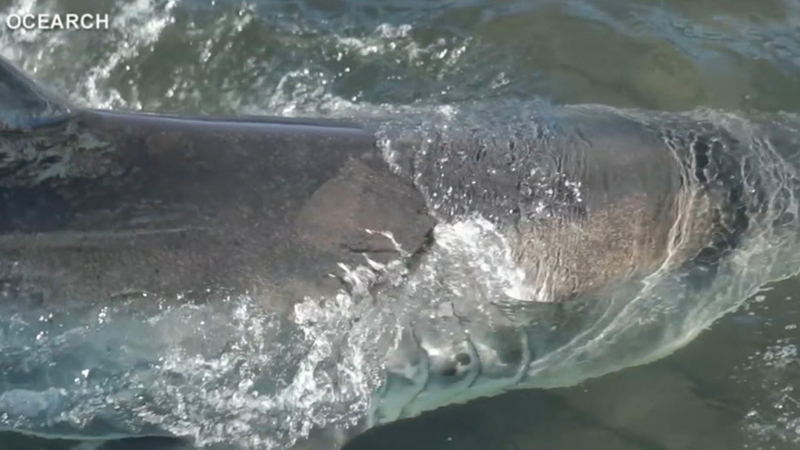 An ornery great white shark is being tracked up and down the East Coast--most recently swimming off the North Carolina shore.

The shark is named Ironbound. He's a 20-year-old apex predator measuring over 12 feet long and weighing in at around 1,000 pounds. But his size is not what caught the eye of researchers; that was his temper.

"That's what struck us with Ironbound. It wasn't really his size. He was just a very determined animal to deal with. He was very bit up from other large sharks he'd been tangling with," Ocearch founder Chris Fischer said.

Ironbound's tracker pings each time he comes to the surface. It last pinged on Tuesday, May 10, off the coast of the Cape Hatteras National Seashore along the Outer Banks of North Carolina. Two weeks before that, he was swimming off the New Jersey coast.

Fischer said this is something they see every year with great whites. The sharks migrate south for the winter seeking warmer water and north during the summer seeking plentiful hunting grounds.

However, those migrations aren't uniform. Sometimes a shark will head north too early and wind up in water that's too cold; they'll then quickly turn around and head back south for a little while longer.

For example, nobody officially knows where great white sharks mate. The leading theory is somewhere off the coast of North Carolina, but Ocearch hopes their work can help shed more light on that mystery.

In addition, tagging sharks like Ironbound or Mary Lee--the 4,000 pound female tagged back in 2012--helps show people that these animals are always nearby but very rarely harm humans.

In fact, there were only 73 unprovoked shark bites in the world in 2021. Ocearch credits Mary Lee and the continued work by countless shark researchers.