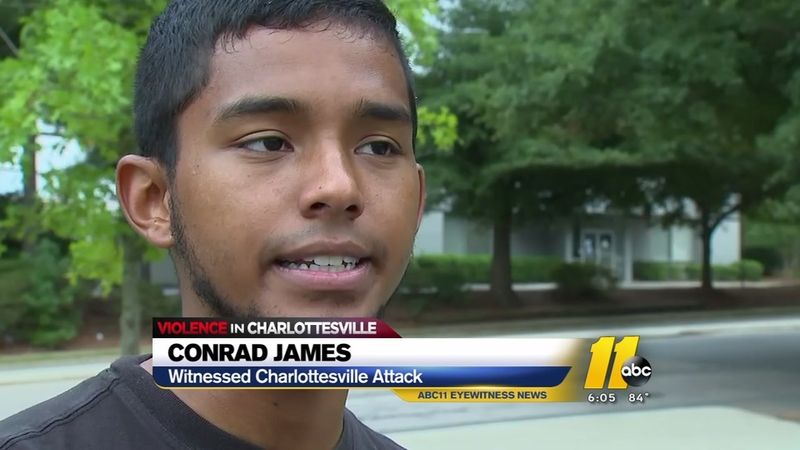 RALEIGH, North Carolina (WTVD) -- Hundreds gathered at Martin Luther King Jr. Memorial Gardens on Monday night for a candlelight vigil that honors those injured and killed during the chaos in Charlottesville, Virginia.

Conrad James of Raleigh was in Charlottesville and captured the image of a vehicle slamming into a crowd of protesters Saturday.

"It was a full out war going on," James said. "I had no idea it was going to get to this point."

James represents the social justice group Living Ultra-Violet. He said he was encouraged to travel up to Charlottesville on Saturday and support counter protests against the white nationalists' rally.

After the two groups clashed, James said he retreated with supporters and attempted to shoot a video of their march in solidarity.

"Then all of a sudden there's this Dodge Challenger that just floors it," James told ABC11.

Elena Ceberio of Raleigh, her family, and pastor were walking toward the intersection where nearly two dozen people were mowed down.

"The bang. The boom was so loud," Ceberio said.

Heather Heyer, a 32-year-old paralegal, died from injuries sustained in that attack. Nineteen others were injured, and nine remained hospitalized Monday evening.

The car's driver, 20-year-old James Alex Fields Jr., was charged with second-degree murder and other counts.

Monday, he was denied bond.

Despite the deadly attack, both James and Ceberio said they will not stop their call for equality.

"It strengthens it," Ceberio. "The only way, there's going to be Nazis ...the only way to counteract that is by a community committed to lifting up the least of us."

James added: "I don't necessarily know how to fix it, but what I do know is that people just need to come back to what they were put here to do, which is to love, to share, to learn."