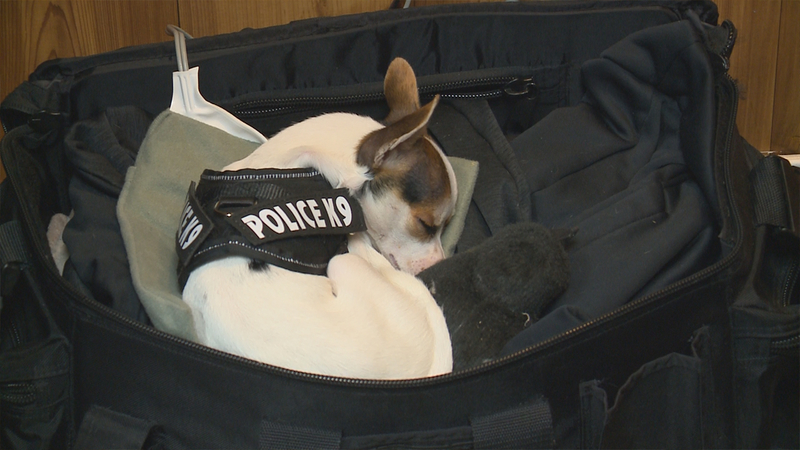 Tiny rescue dog is the newest member of the police force

MARBLEHEAD, Ohio -- A pint-sized pup adopted by a northern Ohio police department is having a positive impact on officers and the community.

The Marblehead Police Department has a new K-9 officer, but he's not the typical dog you'd see on the force.

That's because Zorro is a 4-month-old, 4.2-pound, Chihuahua/Rat Terrier mix.

Chief Casey Joy said he was inspired by news stories about animals in need after Hurricane Florence, so he went on Petfinder.com to give a furry friend a new home -- well, a new job.

Joy said he adopted Zorro a few months back and the pooch started just days later.

And now the pup is an official member of the force.

"He was sworn in last night at the Village Council meeting as the village mascot," Joy told WTVG. "Anyone who sees him immediately has a smile on their face. We posted his picture after he was sworn in, and within hours he had more than 50,000 likes."

Even though Zorro is not an official K-9 officer, he still comes to work with Joy every day.

Zorro rides along with Joy on patrols in a special police K-9 vest made by a resident.

"She fell in love with him when she met him, and two days later she came in with the police vest for him," Joy said. "He's been wearing it proudly ever since. When he has the vest on he is all business and reserved, but when it comes off he is more playful. He loves to give kisses. Once he knows you, he likes to climb all over you and be your buddy."

Police said the tiny dog has made a big difference in the village; he has helped relieve officers' stress and helped cheer up the public too.

Zorro lives with Joy and a seizure-detecting dog that helps the chief's son.