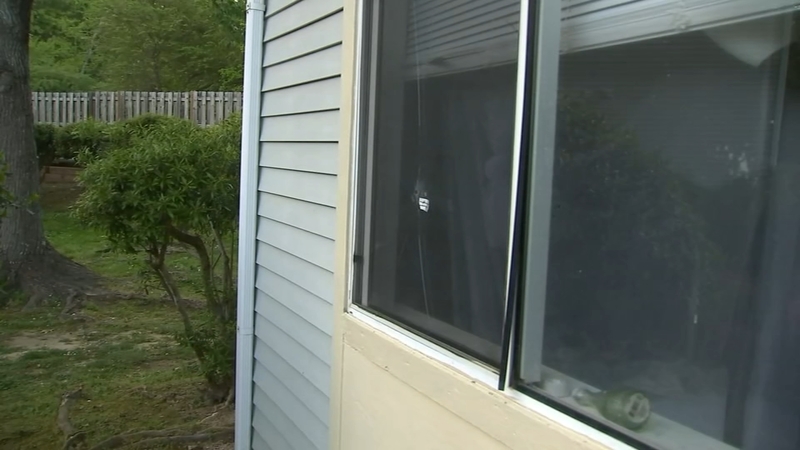 RALEIGH, N.C. (WTVD) -- It's telling that Jazmin Bullock talked to ABC11 on Monday with bullet holes all around her.

"This is a plea for help before it gets any worse," she said.

She stood in her neighbor's apartment, which was riddled with bullets after a Sunday shooting.

She said this is the third shooting in as many weeks at the same Walnut Woods apartment complex.

These documents from @raleighpolice only tell part of the story.
We spoke with folks who live at this apartment complex who have seen 3 shootings in three consecutive weekends.
“It was open fire last night. Bullets were flying everywhere” said one mom of four kids #abc11 pic.twitter.com/PDRmh6bi2i

Bullock also found bullets outside her own windows. She said she hid with her four kids in the bathroom Sunday.

Her youngest child is 6 months old. Her oldest is 12 years old.

Bullock doesn't know what the violence is all about, but she wants it to end. She'd also like to move, but this is her only option right now.

"A bullet has nobody's name, no destination and no place it's going," Bullock said. "Innocent bystanders were caught in the middle of this. What I know is that this needs to stop before anybody gets hurt out here or anybody's body. Before a child mourns their mother or both parents together."

ABC11 has reached out to the property management of the apartment complex but has not yet heard back.
Report a correction or typo
Related topics:
raleighsafetystray bulletcrimeshots firedgun violenceapartment
Copyright © 2022 WTVD-TV. All Rights Reserved.
TOP STORIES
LIVE: Tornado warning for Durham, Wake, nearby counties
Homeless veterans get an assist from Durham's Rotary Club
Truck slams into NC woman's new home
SCOTUS makes it tougher for prisoners counsel was ineffective
Shelf cloud seen in Raleigh ahead of line of storms
New NC flood monitoring system ready for next big storm
Father puts 1,000 miles on his car to find specialty formula
Show More
Student says he was told not to mention 'Don't Say Gay' law in speech
Clayton police arrest man in shooting that injured 1
More than 75,000 pounds of baby formula lands in US amid shortage
Report: Top Southern Baptists stonewalled sex abuse victims
Arby's is selling a fast-food staple it's never offered before
More TOP STORIES News