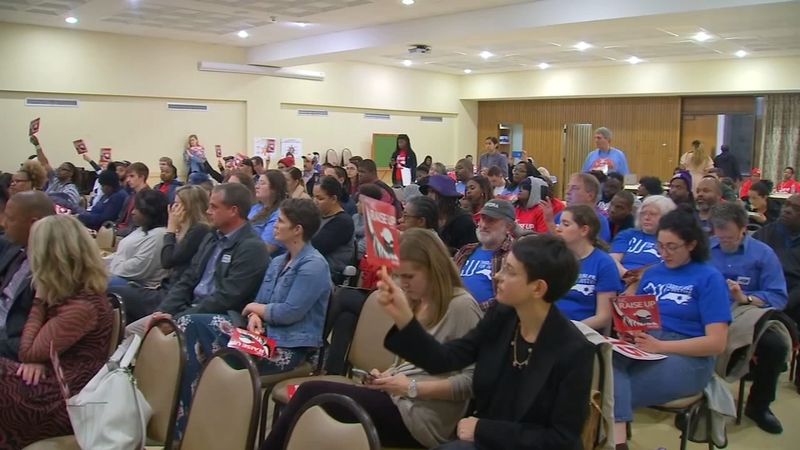 RALEIGH, N.C. (WTVD) -- A coalition of labor groups, advocates and business and faith leaders will call for a $15 minimum wage at a public hearing Thursday in downtown Raleigh.

Packed inside the auxiliary room at First Baptist Church in downtown Raleigh they chanted, "Put 15 on our check, we want we said!" This was a congregation of minimum wage workers from across the Triangle -- Not praying but demanding state leaders boost salaries of its lowest-paid private-sector jobs.

"I am right now in need of a kidney transplant that will cost hundreds of thousands of dollars," Wanda Coker, a worker at a Triangle Burger King, said at the podium.

FIGHT FOR 15: NC low wage workers holding a People’s Hearing tonight in downtown Raleigh before a panel of elected officials and candidates. #abc11
• • •
“Minimum wage is health issue because $7.25 an hour causes a lot of people stress.” pic.twitter.com/K1zYrwO5v8

A coalition of progressive advocacy groups called Raising Wages NC organized the event they called a People's Hearing. Worker after worker rose to testify about their personal struggles to make ends meet before a panel of elected officials and candidates.

They were just some of North Carolina's 38,000 minimum wage workers currently making $7.25 an hour. The state's minimum wage has been stuck at the federal level since 2009. That means someone working full-time earns $15,080 a year -- $1000 less than the federal poverty level.

Shontay Hodge testified as well. The 36-year-old mother of a 9-year-old daughter made time to speak out in between her two minimum wage jobs. She's a safety assistant on a Wake County school bus in the mornings and afternoons and a certified nursing assistant in between.

She argues she's a state employee and should be entitled to the same $15 minimum wage guaranteed to thousands of other state workers in the Republican-backed 2019 state budget.

They want the candidates to publicly state their position on raising the state minimum wage.

RELATED: These states will raise their minimum wage in 2020

"(The General Assembly) can raise the minimum wage -- they did it for some state employees, why not all? Fair is fair," Hodge said.

Some business advocacy groups and conservative lawmakers argue raising the minimum wage would do more harm than good to low-wage workers -- forcing businesses to absorb the added costs by eliminating entry-level jobs.

Tonight, these workers and their union allies pushed back hard.

"We are asking all of you on that stage, join us, fight with us, stand with us until 15 (dollars an hour) and a union is a reality for all North Carolina workers," said NC AFL-CIO President Marybe McMillian

The elected officials and candidates on stage tonight were not invited to talk. This was a listening session. And they got an earful from this group who plan to make the "Fight for 15" one of their top-line issues this election year.
Report a correction or typo
Related topics:
careersraleighncrallynorth carolina newsminimum wage
Copyright © 2021 WTVD-TV. All Rights Reserved.
TOP STORIES
Authorities search for Brian Laundrie in reserve; Petito still missing
'Relieved:' Faith Hedgepeth's family releases statement after arrest
US ramps up plan to expel Haitian migrants gathered in Texas
What are your chances of being exposed to COVID-19 at an event?
1 dead in Cumberland County double shooting, sheriff says
Heavy police presence as protesters trickle in for DC rally
Show More
Odette to increase rip current risk along NC coast; no threat to land
LIVE | SpaceX's 1st private crew set for splashdown off Florida coast
Man dies after Robeson County triple shooting, deputies say
'My Name is Pauli Murray': A Durham-made icon gets her due on film
Faith Hedgepeth's dad watches as accused killer appears in court
More TOP STORIES News