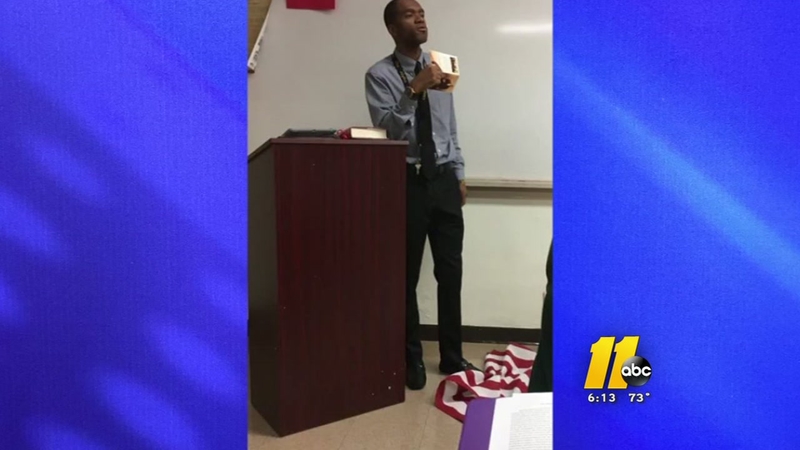 FAYETTEVILLE (WTVD) -- Students and parents at Massey Hill Classical High School in Fayetteville are outraged after a civics teacher reportedly stomped on an American flag as part of a lecture.

Was the #Fayetteville teacher stomping on the flag to explain the 1st Amend. right? Or should he have been suspended https://t.co/4QI8JD9j98

ABC11 eyewitness Alex Dunn sent in a photo of his teacher, Lee Francis, standing on the flag during class. Dunn's father is in the Army.

On Tuesday evening, Francis was placed on administrative leave.

In an exclusive interview with ABC11, Dunn said students were shocked when it happened. He picked up the flag during class and walked out. At least one other student followed him.

"Why would an American want to do that to the flag? Why would a social studies teacher want to disrespect the flag like that?" Dunn said.

He said his teacher may have been trying to teach a lesson about freedom of speech.

Parents have asked Superintendent Frank Till to fire the teacher.

Dunn said he plans to stay in the class, but parents of other students said they are going to pull their kids out of class.

Till says he hopes to complete his investigation into the incident Wednesday.

Fayetteville teacher under fire for stepping on a flag during class