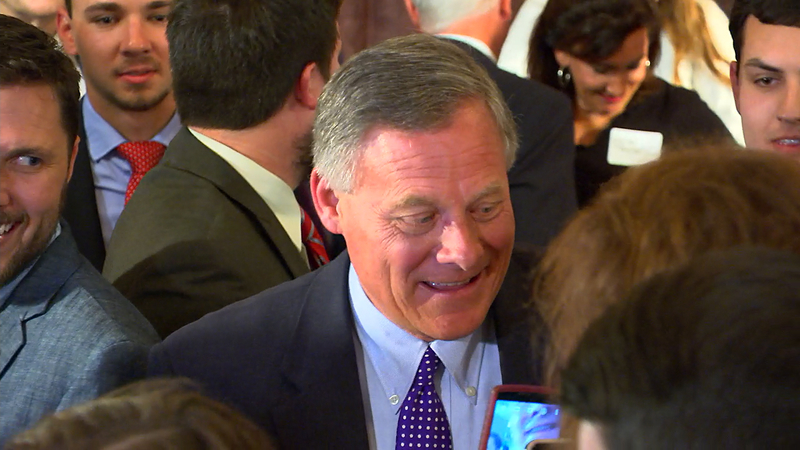 RALEIGH (WTVD) -- Republican Richard Burr of North Carolina has been re-elected to the Senate.

Former state lawmaker Deborah Ross was trying to unseat Burr in one of the most closely watched and hotly contested Senate races in the country.


.@SenatorBurr at podium now "this is better than all the rest" on winning his 3rd term in the U.S. Senate pic.twitter.com/gm7RtKRIyg

Burr began his victory speech at Forsyth Country Club in Winston-Salem by thanking his fellow North Carolina Sen. Thom Tillis, who introduced Burr at the podium.

"I am truly humbled by the support I've received by people from across this state," Burr said.

Burr told the crowd that his win validated his belief that his values matched those of North Carolinians.

"This is a victory for all who have believed in me," Burr said. "As Americans, we literally breathe the air of freedom every day. Our hearts swell with pride knowing we live in the greatest land ever known to mankind."

"Campaigns are about differences. But now that the campaign is over, it's time to move forward," he said. "We should be prepared to make tough decisions as did our nation's founders."

Ross was at the Downtown Marriott in Raleigh on Tuesday night in what was a whirlwind 24 hours for the Senate candidate.

Thank you North Carolina! Honored to continue serving as your Senator #ncsen pic.twitter.com/Vk5hh8I1iL

Ross, a Democrat, spent the day crisscrossing the state, meeting with volunteers and voters at the polls.

Burr has been in Congress 22 years. He first served in the House for five terms and the past two terms as senator.

He's currently the chairman of the Senate Intelligence Committee, and he has been a vocal advocate for men and women in the armed forces.

Throughout Ross' campaign, she ran as a "change" candidate trying to paint Burr as a Washington insider.

An upset in this race could have had huge implications nationally. And Tuesday, Ross said she was confident she could pull off a victory.

"Washington isn't working for you, and you can change Washington by who you elect," Ross said. "And there is no question that I will wake up every morning and do my job for the citizens of North Carolina."

In her concession speech, Ross said "I love the people of North Carolina. It's been a huge honor to run to be your U.S. Senator.

It's been the election of a lifetime," she added.

Her supporters began to jeer when she congratulated Burr on his victory, but Ross quickly and gently reprimanded the disappointed crowd.

"Don't boo, vote," Ross said. "He served this state for more than two decades, and he will be your senator, and please go to him because whoever is your senator needs to serve all the people of this state."

Ross also mentioned victims of Hurricane Matthew and urged that their plight not be forgotten in the midst of the elections.

In closing, Ross said she didn't consider this the end, perhaps hinting at future runs for political office.

"I consider this an opportunity to inspire young people," Ross said.

During the campaign, Burr repeatedly attacked Ross for her work as the former top attorney and lobbyist for the state American Civil Liberties Union in his bid for a third term.

Throughout her campaign, Ross tied the Republican senator to Donald Trump and to state GOP policies such as House Bill 2, the law limiting protections for LGBT people.

"North Carolinians first elected Senator Richard Burr to the United States Senate to fight for their interests in Washington and have rewarded his service by electing him to another term," said Roger F. Wicker, chairman of the National Republican Senatorial Committee. "With his unmatched work to keep our country safe, leadership with supporting our veterans, and passing landmark legislation like the ABLE Act, Senator Burr has made Washington work for North Carolina. Congratulations to Senator Richard Burr on his victory."