Bracketology: A Duke vs. Carolina National Championship? It's possible

WTVD
It would be a dream come true and a game that would more than likely paralyze the Triangle. Fans have fantasized about it since the dawn of the Championship and this year there is a chance, make that a very logical chance, that Duke and North Carolina could face off against each other in the 2017 National Championship game.

They weren't trying, but somehow ABC11's Mark Armstrong and the News & Observer sports guys ended up with a Duke vs. North Carolina final.

Not only has this never happened before, another milestone would be broken-- no ACC team has faced a fellow conference foe in a National Championship game. (Louisville played Duke in the 1986 Final but they weren't members of the ACC.)

"We talked through it and here we are," Armstrong said almost in dismay and disbelief at the end of filling out the bracket.

Not a stunt, not a publicity move, Armstrong along with N&O sports writers Luke DeCock, Andrew Carter and Joe Giglio found themselves staring at a 3 ACC team Final Four with Kansas the lone one out.

If correct, and granted it's a long shot, it would be a drama filled Elite 8 with rematches and grudges to settle.

On one side you have a repeat of the ACC Tournament Championship with Duke taking on Notre Dame and on the other side a game that is sure going to set the hearts of Carolina fans racing, Kansas vs. UNC.

So what about that dream match up?

"I think this series ends up even if they play four games," DeCock said. "This will be a game played entirely on emotion and for that reason I would take the Tar Heels."

"That's Old Roy's revenge," added Giglio. "He beats Kansas, he beats Duke, nobody can ever say a word about the guy for the rest of his life."

The guys could be on to something. According to numbers and stats wizard Nate Silver of FiveThirtyEight fame, both teams have a 7 percent chance of winning the National Championship. (UNC has the lowest chance of all the number one seeds.)

At full strength all agreed that UNC out of foul trouble is the better team against Duke. We'll just have to see how it all shakes out. 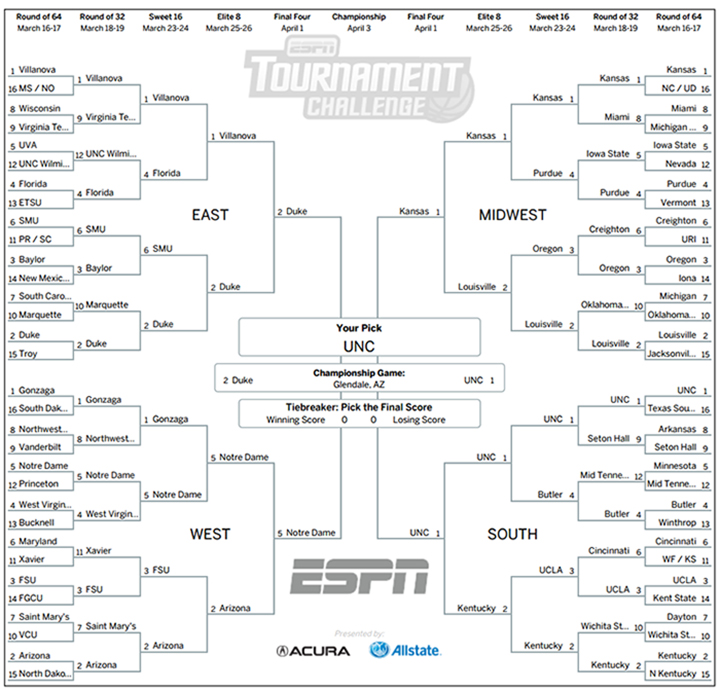