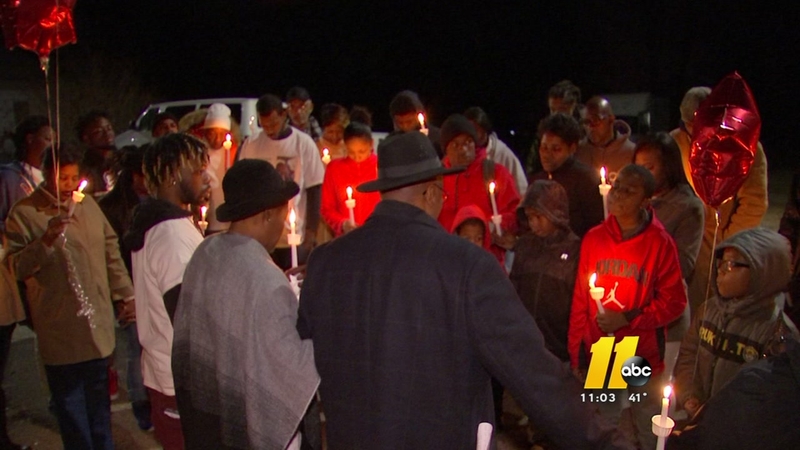 RALEIGH (WTVD) -- Family members of loved ones murdered gathered in front of the North Carolina Old State Capitol Thursday evening to remember those taken too soon.

To honor it, the North Carolina Victim Assistance Network (NCVAN) hosted the vigil.

Alyssa Mozingo was in the crowd. She is the cousin of Faith Hedgepeth, a UNC student found murdered in September of 2012, just weeks before her 20th birthday.

"I really wanted to remind everyone about Faith," said Mozingo.

She also wanted to show support of the NCVAN.

She said she feels lucky to have a big family and support system.

"It's hard to think about people who don't have that," said Mozingo.

Also in the crowd was the family of Britny Puryear. Puryear was a young mother murdered by her boyfriend in 2014.

The pain of violent loss was felt by those who gathered at the NC Old State Capitol and also at another vigil just a few miles away.

Sheila Austin was surrounded by her mother, sister, children, and loved ones at the corner of Mangum and Branch streets.

It's the intersection where she lost her 23-year-old son one year ago to the day.

"We loved him so much, that's just a link in our chain that's been broken," said Austin.

She remembers getting calls from police overnight on December 14, 2016, telling her that her son had been shot.

"He was shot in the chest," recalled Austin.

RELATED: Police search for clues in murder of Demeitrus Austin

One year ago, she gathered with family and friends at the same spot where he was shot. They put up pictures, lit candles, and said prayers.

It's been one year and there's still been no arrest.

While his murder, Hedgepeth's, and so many others have yet to be solved, their families hope things like vigils bring them not only some form of comfort but one day, answers.