Raleigh college student paralyzed in shooting is back home 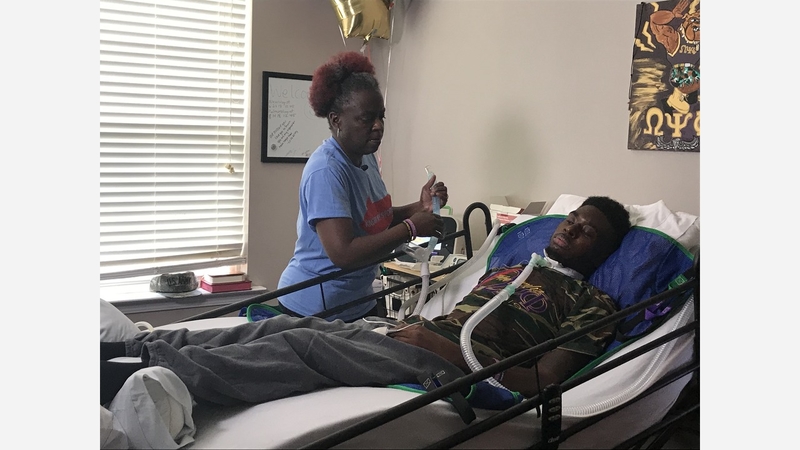 RALEIGH, NC (WTVD) -- Raleigh native and St. Augustine's University student Howard Boone, who was left paralyzed after a shooting in South Carolina, is back home and fighting for his future.

The 23-year-old in his junior year of ROTC had been visiting Columbia's Five Points on March 18, celebrating his initiation into his fraternity, when a gunman open fire into a large crowd.

A bullet struck Boone in the back of his neck, leaving him paralyzed from the neck down.

We are #BooneStrong for St. Augustine’s University student Howard Boone who is finally home in Raleigh after being shot in the back of his neck outside a South Carolina bar in March. He’s paralyzed from the neck down and getting around-the-clock care. #ABC11 pic.twitter.com/7YdVZzJmeZ

He's now finally home from the Shepard Center in Atlanta where he'd been treated since early April.

Doctors there were unable to remove Boone's ventilator, subsequently putting rehab on hold.

Now in a room in his mom's house converted for his medical needs, Boone is under the care of a 12-hour nurse during the day and the careful watch of his mother, Sheraldine Whitley-Lewis at night.

Boone, a criminal justice major, once loved to jump out of airplanes. He had completed five successful jumps at Fort Benning in Georgia to earn his airborne certification last year, with plans to graduate and become a commissioned officer in the Army.

"When it first happened I always asked myself, why me?" Boone said about the shot that rendered him paralyzed. "But like my family always says, God doesn't put his soldiers out for no reason - He tests his best soldiers."

His mom-turned-caregiver said their church community and family have been the biggest sources of support as Boone hopes to one day walk again.

In the meantime, medical bills are mounting.