Very mixed reviews for the DOT's new I-540 light system 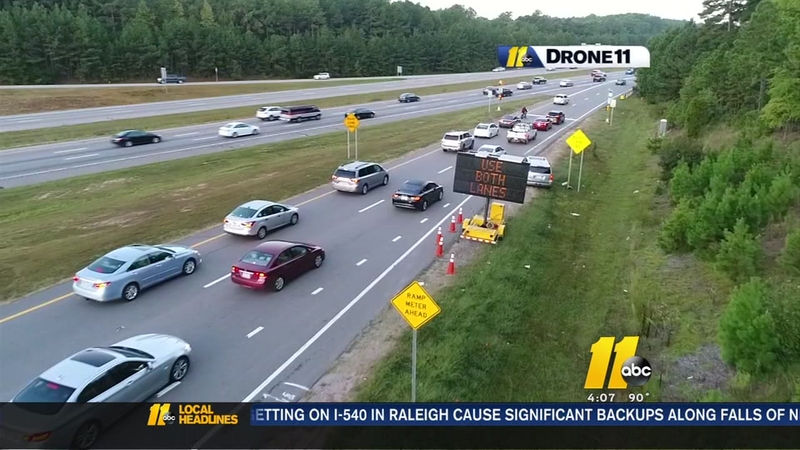 RALEIGH (WTVD) -- The state's effort to relieve congestion along I-540, Raleigh's "outer loop," had its first real test Wednesday morning and largely depending on where you began your commute, your ride to work might have been a "nice surprise" or a "total mess."

The Department of Transportation switched on on-ramp signal lights at four key entrance points along the highway (Leesville, Creedmoor, Six Forks, Falls of Neuse) and started regulating the frequency of vehicles getting on 540.

Three ABC11 crews were dispatched to different sections of the road, and all three reported improved conditions on the highway from previous commute mornings.

For days, drivers have been sounding off about the plan, some confused as to how it would work, other concerned with how well it would work. The DOT tried to use the lights for the first time Tuesday morning but shut them down again within 30 minutes because the synchronization was off.

DOT spokesman Steve Abbott said that was caused by a mechanical error and was fixed within hours.

DOT video on how the lights work

Abbott said there was one problem with the on-ramp signal light at the Leesville entrance Wednesday morning. One of the signal lights got "stuck" on green.

The on-ramp signals also appear to have confirmed - anecdotally anyway - the concerns expressed by many drivers in previous days: that a smoother flowing 540 may mean more clogged ancillary roads leading up to the highway.

Drivers reported longer lines on both Six Forks and Falls of Neuse than they were used to seeing; many attributed that to the "stop and go" effect of the new signal lights.

Drone 11 over the new signals

Matt Phillips lives north of 540 off Six Forks and said he noticed more traffic than usual on the two-lane thoroughfare. "I left earlier to take my son to school," Phillips told ABC11 around 9am. "And when I came back I saw it was already backing up. I foresee it being not very advantageous to the individuals who live north of 540 especially."