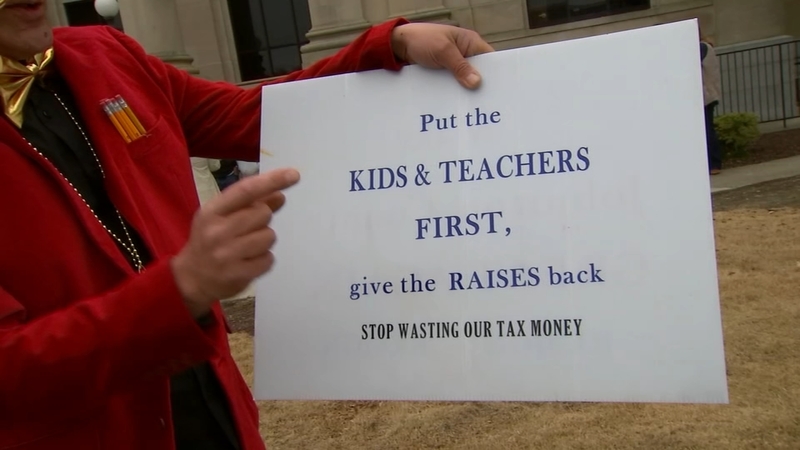 JOHNSTON COUNTY, N.C. (WTVD) -- Dozens of Johnston County residents showed up to a press conference on the steps of the county courthouse to demand answers about corruption claims within the school board.

One woman asked about a video of a school employee being followed to her car, and chair members abruptly ended the conversation.

"Thank you, that's enough questions," Johnston County School Board Chair Todd Sutton said before grabbing his papers and walking away.

Before the tense moment, Sutton set out to rebuke claims of criminal activity, corruption and mishandling of public funds.

"That is totally untrue," said Sutton.

He did however say he recently heard an audio recording he found concerning.

The tape apparently had a recording of a male district employee making sexual advances on a female employee while she repeatedly asked him to stop.

"I have a daughter and a wife at home. If that was to take place, I would want to see justice taken care of," Sutton said.

But Ronald Johnson, another school board member, said he stands by his claims other district leaders are failing students and staff.

He provided a packet of emails he said shows one board member engaged in a conflict of interest and used their position on the school board to boost business.

Johnson also said district leaders were aware of sexual harassment incidents, one of which was caught on surveillance video on school property.

"They already have some (video). They've done nothing with what they have," said Johnson.

He said the board has been trying to sweep the incidents under the rug.

"They have failed to talk to the female employee. They know her identity because it is on camera," he said.

There have been calls for the State Bureau of Investigation to handle the case.

An official for the SBI said the agency has not received any evidence and will usually only investigate if the request has been made by a local sheriff or District Attorney.
Report a correction or typo
Related topics:
educationjohnston countyschool boardcorruptionnorth carolina news
Copyright © 2021 WTVD-TV. All Rights Reserved.
More Videos
From CNN Newsource affiliates
TOP STORIES