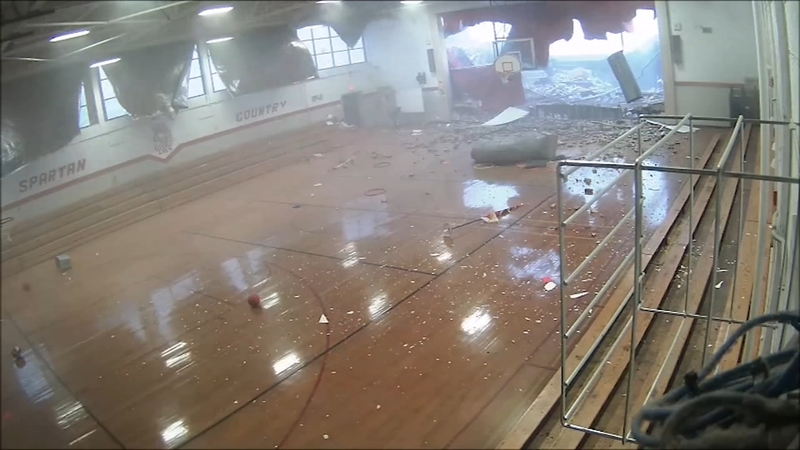 SAMPSON COUNTY, N.C. (WTVD) -- Storms moving through Sampson County damaged the roof of the gym at Union Intermediate Elementary School on Monday while students were in the building.

A spokesperson for Sampson County Schools said part of the roof near the back part of the school's gym blew off. Twenty-one children and a teacher were in the gym at the time, but they ran the other way as bricks and wooden beams started falling.

Video footage obtained by ABC11 on Tuesday captured the scene as children dashed away from the oncoming burst of wind.

"The students were doing their gym activities and all of a sudden it's just debris starts flowing in and you see the sky," Sampson County Schools spokesperson Wendy Cabral said.

A DAY AFTER THE STORMS: Here’s a look at the damage inside Union Intermediate School. The stage inside the gymnasium is destroyed. Architects and engineers are on scene today assessing and clearing debris. #abc11 pic.twitter.com/zf3JCI0ssm

Cabral said the roof came off over a stage area near the back of the gym. Principal Dondi Hobbs said the stage curtain was closed, which served as a buffer between the students and the debris.

"I am appreciative of God's blessings," Hobbs said. "He takes care of us and directs us all the time."

Three fifth graders were taken to the hospital, but have since gone home. The extent of their injuries is currently unknown.

The National Weather Service confirmed Tuesday that a microburst with winds up to 85 mph was to blame for the damage.

Fifth grader Kevin and his younger brother said they heard the crashing from another part of the school.

"So, I was praying in the middle of that moment so everybody could be safe," Kevin said, adding that his friends are OK and weren't seriously injured.

Sampson County Schools said administrators dismissed children early and got them on buses or to the middle school while they waited for parents to arrive.

Sampson County was under a severe thunderstorm warning from 2:12 p.m. to 3 p.m. Monday.

Classes were canceled at the school Tuesday. Classes may resume as early as Thursday.

"There's a lot of debris and glass in that class in that gym, at this time," Cabral said.

Some images of the microburst that occurred this afternoon in NW Raleigh. #NCwx https://t.co/D4XQV7VyRm

Hobbs assured families the rest of the building was safe. "We're dealing with minimal damage, as opposed to some of the things that could have happened," Hobbs said.