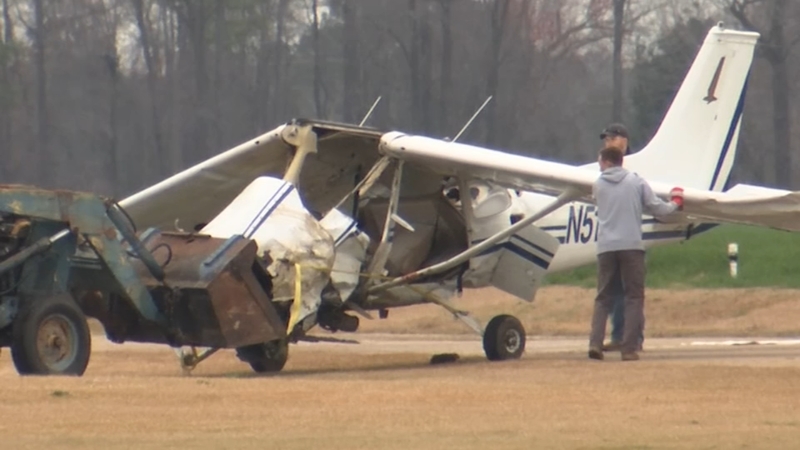 FAYETTEVILLE, N.C. (WTVD) -- A small plane crashed at an airport in Fayetteville Monday afternoon, injuring a total of four people.

It happened at Gray's Creek Airport on Butler Nursery Road at 1:50 p.m. According to a news release from the State Highway Patrol, the plane crashed into a field next to the runway shortly after take-off.

Gray's Creek Fire Chief Joe Marsh said his grandson was on the Cessna fixed wing single-engine aircraft when it crashed. He was taken to the hospital with a broken ankle and facial injuries.

In total, a pilot and three other young adults were injured, according to a Cumberland County spokesperson. The state highway patrol said all four had serious injuries.

One mother tells us this was her son’s first day at the Grays Creek Airport with the NC Works program. He had already flown earlier today before the crash. He was in the facility when the crash happened. @ABC11_WTVD pic.twitter.com/oaF8gTWfUG

"I ran to him first and the other guys started going to the other patients," Marsh said in a phone interview. "I stayed with him and one of my other guys came up and helped with him, which you just try to focus on your job."

Family members of Dominique Northcutt said she is in critical condition as neurosurgeons perform life-saving surgery to stop bleeding in her brain.

Northcutt's aunt, Nell Rhodes, said her niece has extensive injuries including broken bones, cuts on her legs and injuries to her neck, spine and face.

When Deirdre Diamond-Martinez received a phone call about the crash, she was in disbelief.

"I didn't think it was real because I just initially thought my son was flying paper airplanes."

This is what some of the people we spoke to this evening were doing at the airport today. It was an aviation careers day. @ABC11_WTVD pic.twitter.com/KTCKtX3RwM

According to a county press release, several young adults were spending the day at the Grays Creek Airport for an Aviation Career day, hosted by the Cumberland County Workforce Development. Several people, including 14-year-old Patrick Martinez, were going to learn about airplane mechanics and pilot careers.

Martinez, one of the teenagers in the program, said he had flown earlier in the day. He said his instructor was on the plane when it crashed.

"It's hard because my son, you know, he's not really feeling this flying thing, but he'll still work with the program," Martinez's mother said.

Martinez says her son has been a part of the N.C. Works program for nearly two years now.

"I kept calling him over and over again, sometimes the calls didn't go through," his mom Deirdre Diamond-Martinez said. "Eventually he called me and said he was okay."

Patrick Martinez said Monday's crash will make him think twice about going up in the air, again.

"You only have, basically, one life. So, you lose that, you're gone," Martinez said.