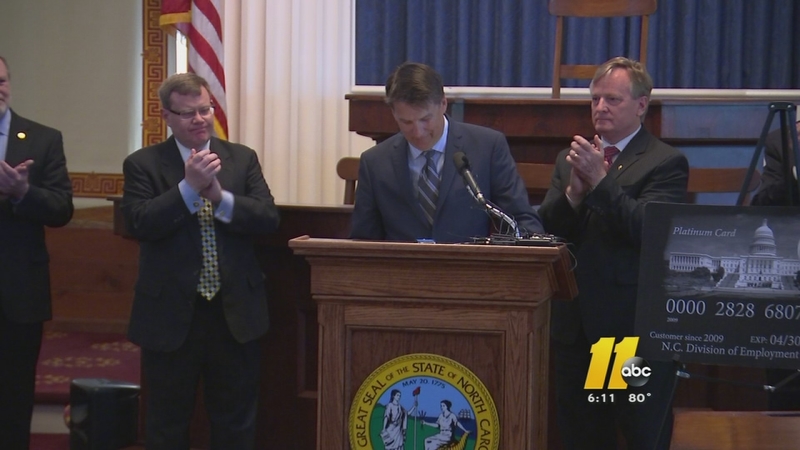 RALEIGH (WTVD) -- Governor Pat McCrory said Tuesday that North Carolina's $2.75 billion debt to the federal government to pay unemployment insurance that started piling up in 2009 has been paid off.

At a news conference, McCrory thanked Republican leaders in the North Carolina House and Senate for coming up with reforms to help retire the debt.

"Let me give you a little history," McCrory told a crowd of lawmakers and government higher-ups. "In February 2009, North Carolina started borrowing from the federal government to extend unemployment insurance benefits."

The governor went on to sum up how the state found itself saddled with nearly $3 billion in debt and why paying it off matters. For starters, because each year the state didn't pay off the debt, North Carolina businesses would end up paying incrementally more in taxes.

McCrory said this year alone, with the debt paid off, North Carolina businesses would save $280 million in penalties.

"We helped free North Carolina from debt four years sooner than if we had not acted," Berger said. "And that four years is four years without that excessive tax on jobs."

However, not everyone sees it through the same rosy glasses. While paying off the debt early saved businesses money, it cost unemployed people real money. To pay off the debt more quickly, the state slashed unemployment benefits - both in terms of how much a person can get and how long they can get it for.

"Sure, you slash benefits dramatically, you're going to pay the debt off faster," said Rob Schofield with the liberal N.C. Justice Center. "If you don't pay for your kid's food and medicine, you could pay off your mortgage a little earlier."

"These are permanent cuts," said Schofield. "Where we were once in the middle of the pack, about average in the country in what people got in benefits when they were unemployed. Now, as far as how many people get unemployment insurance and how long they get it for, we've gone to the bottom. Average North Carolinians who lose their job through no fault of their own are really going to struggle going forward."