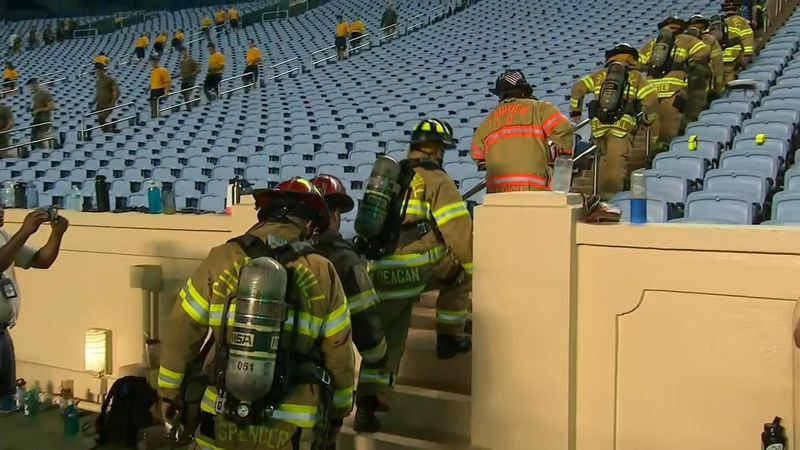 CHAPEL HILL, N.C. (WTVD) -- Students, first responders and other community members got up early Wednesday to honor the thousands of Americans killed in the September 11 terrorist attack.

In what has become an annual event, Americans get up before sunrise to run up and down 2,076 steps in Kenan Memorial Stadium at the University of North Carolina.

SEE ALSO: US to commemorate 9/11 as its aftermath extends and evolves

The event is meant to remember the Americans killed in the terror attacks and also honor the first responders who rushed into the burning buildings to try and save lives.

One of the youngest participants in the stair climb was not even born when the towers were attacked. Still, 10-year-old Vivian Snow told her father that she wanted to be part of the event.

"It was hard but it felt good, because I knew I was doing it for a good cause and for people who--they knew that they weren't going to survive, but they wanted to help others," Vivian said.

Lt. Col. Dan Snow and his 10 year old daughter Vivian are all smiles after their 2,076 steps inside Kenan Stadium at @UNC. They’re among the participants of the #911Anniversary stair run honoring victims of the attack on America. @ABC11_WTVD pic.twitter.com/8qAsnDPdvc

This year some firefighters even dressed in full gear, which includes about 50 extra pounds, and participated in the event.

Throughout the day UNC students and faculty will spend time at the 9/11 Memorial Garden on campus that is dedicated to the six Tar Heels who were killed during the attacks.

The names of @UNC alumni killed during the #September11 attacks are displayed in this on campus memorial. A solitary bench is there for those who need time and space to reflect on the events of this this sad anniversary. @ABC11_WTVD pic.twitter.com/V35cezECLY