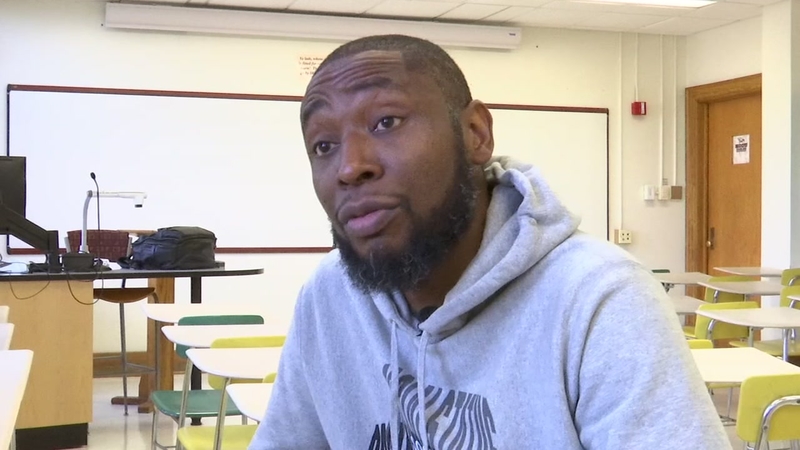 For the next hour-plus, the small group of students will discuss music history, and just plain history, with Douthit.

It's a homecoming of sorts for the professor, who got his professional start on-campus two decades earlier pursuing a different dream: music. That's where Douthit, better-known as 9th Wonder, teamed up with fellow students Phonte Coleman and Thomas Jones, known as Big Pooh, to create the group Little Brother.

"You know we realized (we were becoming big) when people started to like our music outside the confines of where we live," said Douthit during an interview after class.

Douthit was a student at NC Central from 1993-1995 before he transferred to NC State; he would end up transferring back to NC Central.

His producing on Little Brother's debut release The Listening caught the attention of Jay-Z, which led to him working with the famed rapper and eventually several other stars. It also presented a quick rise for Douthit, especially considering he never planned on entering the music industry when he first started at NC Central.

"I didn't want to work at a desk for the rest of my life, right? I wanted to create my own destiny or create my own job," Douthit said.

Two years after working with Jay-Z, Douthit earned a Grammy Award for his work on Mary J. Blige's album The Breakthrough.

He's done it all while maintaining his North Carolina roots, skipping the supposedly-natural move to Los Angeles or New York to stay in the Triangle.

"I didn't want to grow sick of or grow tired of or lose the enchantment of hip-hop," Douthit explained, adding he preferred the lifestyle here compared to that of larger cities.

In 2006, Douthit returned to NC Central - not to finish his degree - but to teach. He serves as Artist in Residence at the University's History Department; he also teaches down the road at Duke University as Lecturing Fellow for African & African-American Studies.

Douthit is in near-constant movement during his classes, pacing up and down rows, stopping to engage students in discussion, almost never lecturing from a podium or desk.

While he's been back on-campus, Douthit has used the opportunity to enhance his own label, JAMLA Records, noting lessons he's picked up from basketball coaches Mike Krzyzewski of Duke and LeVelle Moton of NC Central.

What is for him is teaching. It's a passion he's followed in his mother's footsteps; she still works in the Winston-Salem/Forsyth County school system.

"I had incredible teachers from kindergarten all the way thru 12th grade," Douthit said.

Outside his work at NC Central and Duke, he's served as a fellow in the Hip Hop Archive at Harvard and is part of the Executive Committee of Hip-Hop and Rap at the Smithsonian in Washington, D.C.

"I had a conversation with (Hutchins Center for African & African American Research Director at Harvard) Dr. Henry Louis Gates. I was afraid the first day I was at Harvard, because I'm like 'I'm at Harvard. This is the top school in the country.' And he told me, 'You're an expert in what you do. You know this subject of hip-hop, and the history and culture of it backwards and forwards. You're here because you're supposed to be here,'" Douthit recalled.

And in a moment of state pride, he worked with North Carolina artists Rapsody and J.Cole in the 2018 release "Sojourner."