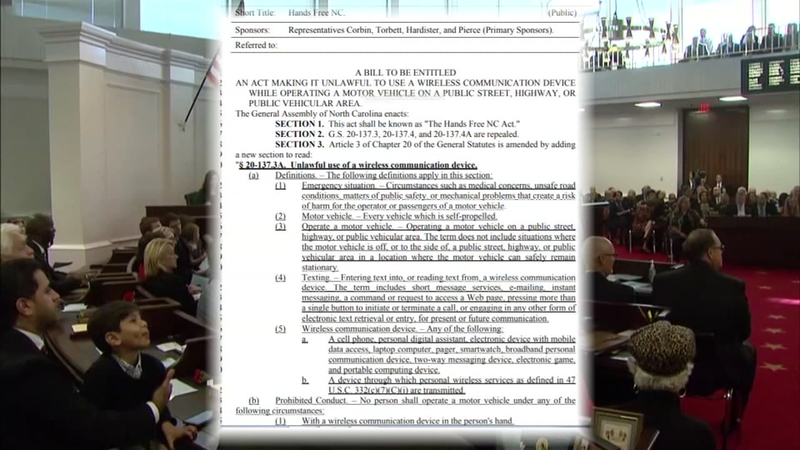 CHARLOTTE, N.C. (WTVD) -- A new bill proposed in the House Thursday would make it illegal in North Carolina to use hand-held communication devices, such as cellphones, behind the wheel while driving.

According to NCDOT, in 2018 there were 123 fatalities coded as a result of distracted driving.

AAA Carolinas said in a news release Thursday that it believes the numbers are higher because the behavior is difficult to prove and drivers won't readily admit to doing it.

Tasha Hairston Springs, who got in an accident years ago because of her "own" distracted driving, is in support of the proposed legislation.

"I believe that this law will help enforce and make people feel a certain kind of way- like making it taboo and making it like drunk driving. I didn't think texting and driving could do anything to me. I had done it for years. I swerved. It was okay. It was no problem but this particular time it got me," said Springs.

Currently in North Carolina, there are no restrictions on talking on a cellphone while driving for most motorists. However, school bus drivers and drivers who are under the age of 18 are prohibited from using cellphones.

The Hands Free NC bill will give law enforcement the ability to stop drivers simply for holding their phone, whereas in the past they would have to have a secondary reason like speeding or not wearing a seat belt.