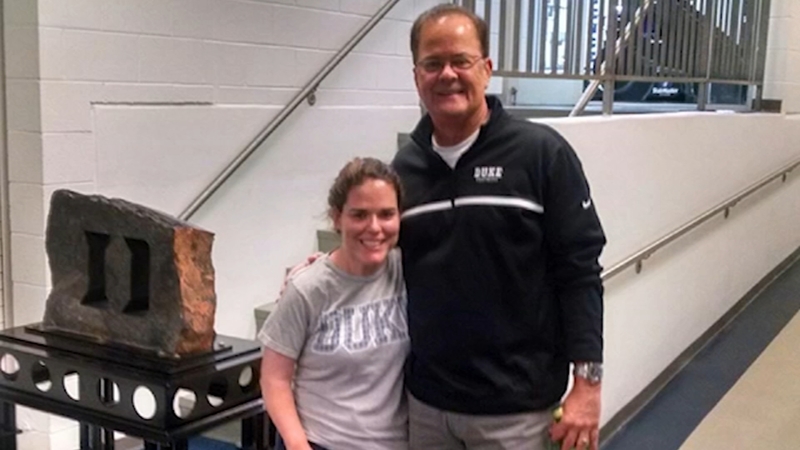 "We tell her that there's a reason she was born that year," he said.

Roughly 10 years later, Baggett made her first appearance at a UNC-Duke game at Cameron Indoor Stadium, an experience that would change her life forever. She remembers it vividly.

"The atmosphere of Cameron, it's like, it's electric," she recalled.

Shane Battier quickly became Baggett's favorite player. She was using her mom's ticket that night. Mom, it turns out, never got to go again.

"The rest was history. That ticket became my ticket," Abigail smiled when recounting the story and so did her dad.

That Baggett was able to grow into a sports fan is a minor miracle in itself. She was born a full 14 weeks premature, which as Dale Baggett said, "was right on the borderline of whether a premature kid would make it or not, whether they would even attempt (the birth)."

She made it. It was three months before her parents were able to take her home and the early birth has led to some limitations in her life, including cerebral palsy. Her love of sports though is not one of them -- in fact, it has sustained her and led to her dive into sports blogging. There was one particularly low moment, after losing a job she loved.

"I got really down on myself. And you know, my mom's like, 'why don't you start a sports blog? That's one thing that you love and that you're passionate about,'" Baggett said.

The pandemic has sidelined her job as a kids counselor at Camp Chestnut Ridge in Efland.

She misses it terribly but with the added time has become a prolific poster on her website "HeartHustleSports.com," a title inspired in part by Jordan Goldwire.

"She prepares thoroughly for the next day, like Sunday morning, she's right on it," Dale Baggett said. "You know, covering Saturday football games and stuff, and she plans everything out. She's very organized and methodical."

Asked to describe her writing style, Baggett responded: "I like to ask lots of questions. How did they win this game? Why did they lose this game?"

Perhaps predictably, my interview with her wound up with her turning the tables, asking several questions about how I'd gotten into sports broadcasting.

Abigail's blogging has led to many memorable interactions. Yankees great Bernie Williams has reached out and she's had countless other thrills.