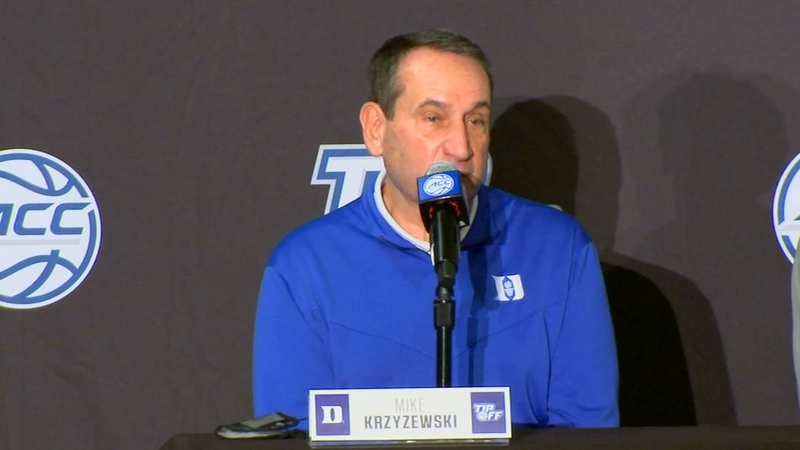 CHARLOTTE, N.C. (WTVD) -- The Marriott Charlotte City Center is playing host to the 2021 ACC Media Tip Off. The event, which takes place Tuesday and Wednesday, highlights basketball players and coaches from the ACC's member schools as they look ahead to the upcoming season.

Tuesday featured men's basketball and Wednesday will be reserved for the women.

ACC Commissioner Jim Phillips lead off his opening statements this morning with a nod to Coach K saying he’s thrilled coach gets “one more go around” at Duke. #ACCTipoff #ABC11 pic.twitter.com/C7Z3lHF7fJ

"Coach K, I'm thrilled there will be one more go around for him," said Phillips. "I don't think I can put into words what this loss is going to be."

And on Williams' accomplishments, Phillips added, "Nobody won 900 games quicker than Coach Williams did. We all heard the testimonies of what he did to his former players ... he's meant so much to them."

"You all keep reminding me," said Krzyzewski when asked another question about his final season. "I'm 74 and still have a memory."

This year's season will look much different than last year, when players were competing in empty arenas across the United States.

Perhaps what may be top of mind for Krzyzewski at the start of this season is being in the moment with his guys.

"They can't play for me," Krzyzewski said. "They've got to play for us. We're not going to be good unless they own it. And it's like you can't do it for somebody, you've got to do it for you. That's the mentality we have and will continue to have."

Of course, you can't help but call attention to Krzyzewski's final year without respecting his entire career. However, he's quick to remind anyone that he doesn't give it any thought.

A lot of attention here in Charlotte is on Coach K’s final season as head coach and the impact he’s had on the sport. But he’s not thinking about that heading into this year. pic.twitter.com/6aLRd8moO1

The day would not be complete absent of some work and some play.

"He's a machine. It's not luck," Notre Dame men's basketball head coach Mike Brey said of Krzyzewski. "It's how the man is wired."

"There's no friendly rivalry," Keatts said. "Obviously every time we compete, we're NC State and we want to win the game. And I'm sure he's got to represent his team and his school."

Of the big three ACC schools in the Triangle, the Blue Devils have the first exhibition game of the season. Duke will host Winston-Salem State University in an exhibition matchup at 1:30 p.m. on Oct. 30.

The Wolfpack tips things off with an exhibition at PNC Arena at 7 p.m. on Nov. 1 against Elizabeth City State.