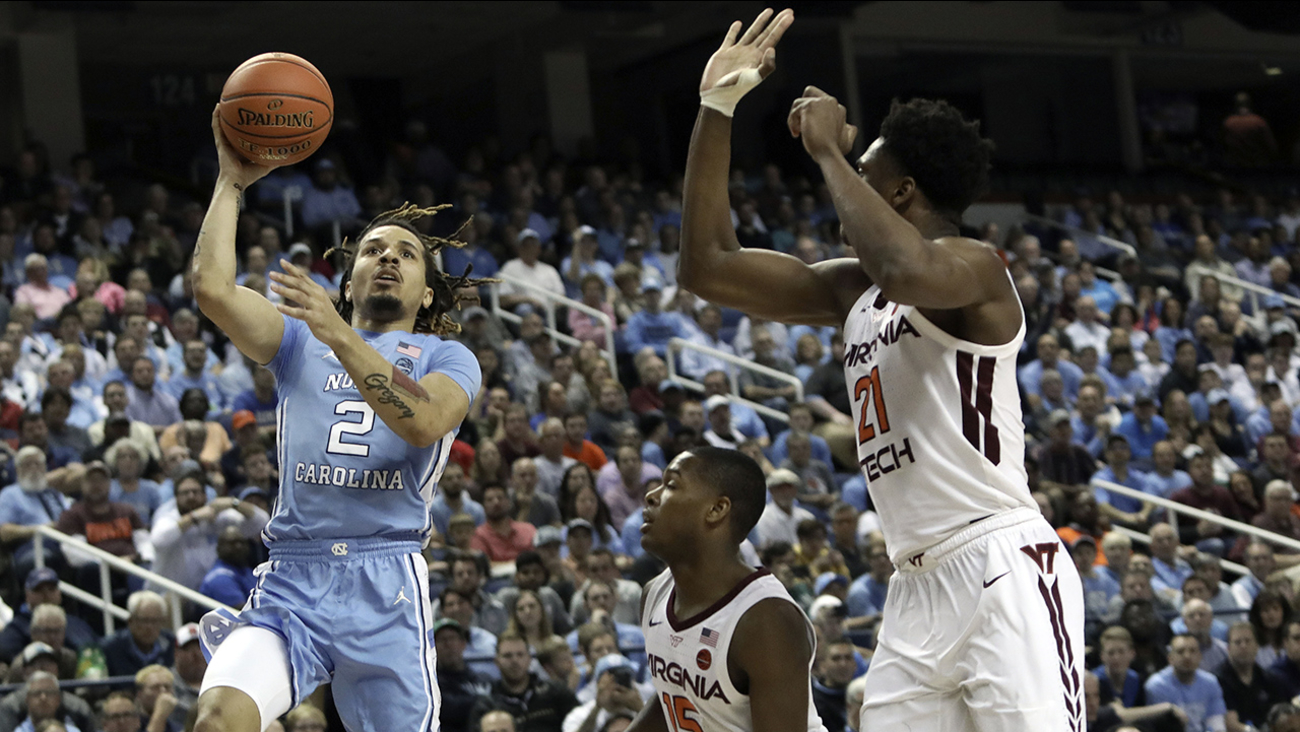 GREENSBORO, N.C. (WTVD) -- Survive and advance. Step one for North Carolina is complete after a 78-56 win Tuesday against Virginia Tech to open the ACC Tournament.

That didn't faze UNC's players, who talked Monday about having the chance to make up for the poor showing.

Brandon Robinson on leading his team to a big win. pic.twitter.com/D8Vcpby2qC

The Tar Heels lost a double-overtime thriller to the Hokies earlier this year, 79-77, but led 32-26 at halftime and left no doubt as they steadily pulled away, sparked by a Cole Anthony 3-pointer that pushed the lead to 13 early in the second half.

Tar Heels senior Brandon Robinson set the tone early with a couple of 3s and UNC controlled the paint and the glass, outrebounding Tech 45-30

Robinson hit 2 more 3s late to push the lead to 20 with 7 minutes to play. He finished with 5 3-pointers and 17 points, one of four Tar Heels in double figures. Garrison Brooks led the way with 20 points, getting at least 20 in his last seven games.

Freshman Armando Bacot finished with a double-double 16 points and 11 rebounds.

It was the Heels' ninth win in the last 11 tries against the Hokies. Robinson and freshman guard Cole Anthony did not play in the regular-season loss in Blacksburg, Virginia.

A 12-0 run over the first six minutes of the first half gave UNC a cushion they would never relinquish. Virginia Tech made 6 3s to stay in the game but shot poorly overall, making just 10-of-36 from beyond the arc.

UNC senior Christian Keeling suffered an injury to his left leg in the final minute of the first half and had to be helped off the court. He went directly into the locker room but returned to the lineup looking no worse for wear at the 10:37 mark of the second half. 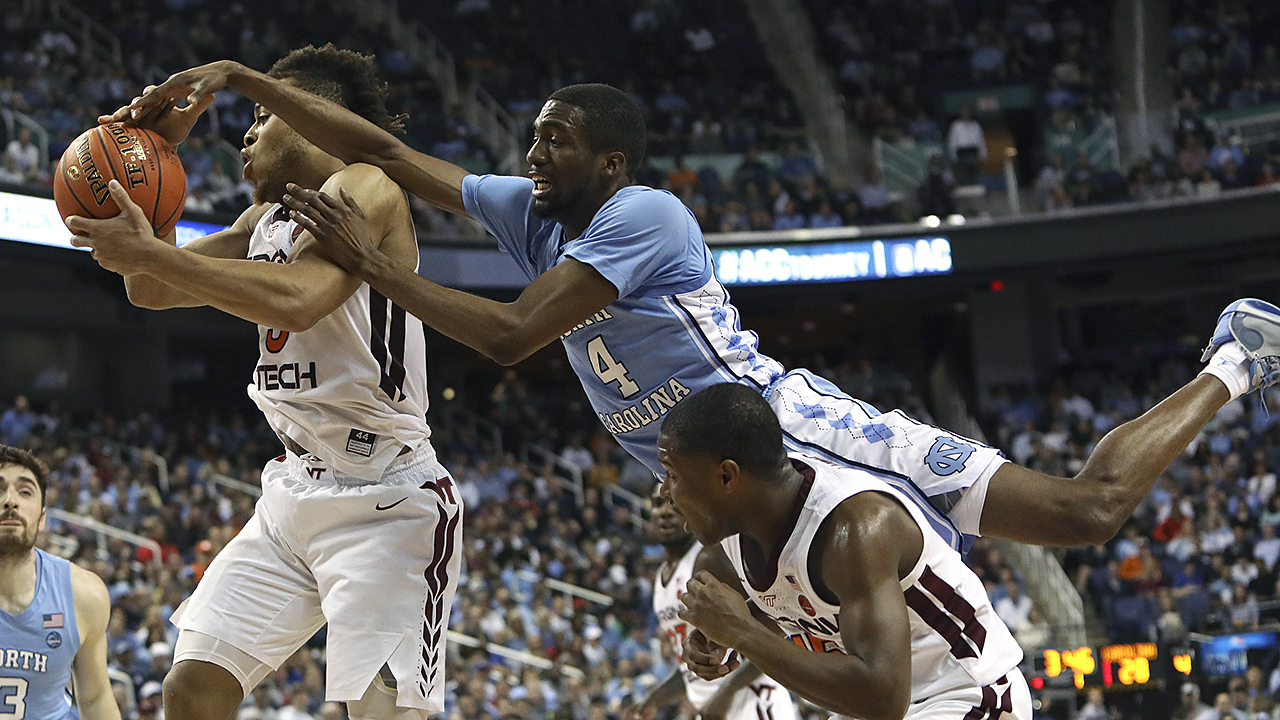 North Carolina will play Syracuse on Wednesday evening at 9 p.m. The Heels beat the Orange 92-79 earlier this year.

Justin Champagnie felt snubbed after being left off the ACC's All-Freshman team.

So he decided to take it out on Wake Forest in the opening round of the Atlantic Coast Conference Tournament on Tuesday night, scoring a career-high 31 points to lead Pittsburgh to an 81-72 victory over the Demon Deacons.

"I felt disrespected," Champagnie said. "I used it as motivation."

Pittsburgh advances to play fifth-seeded North Carolina State in the second round on Wednesday.

Twelfth-seeded Wake Forest was led by Olivier Sarr's 20 points and 13 rebounds. Isaiah Mucius had 19 points and Brandon Childress added 17 for the Demon Deacons (13-18).

Pitt coach Jeff Capel said he felt like his team had hit a wall down the stretch this season because they were the only ACC team that didn't have a bye. Their bye came after the season. 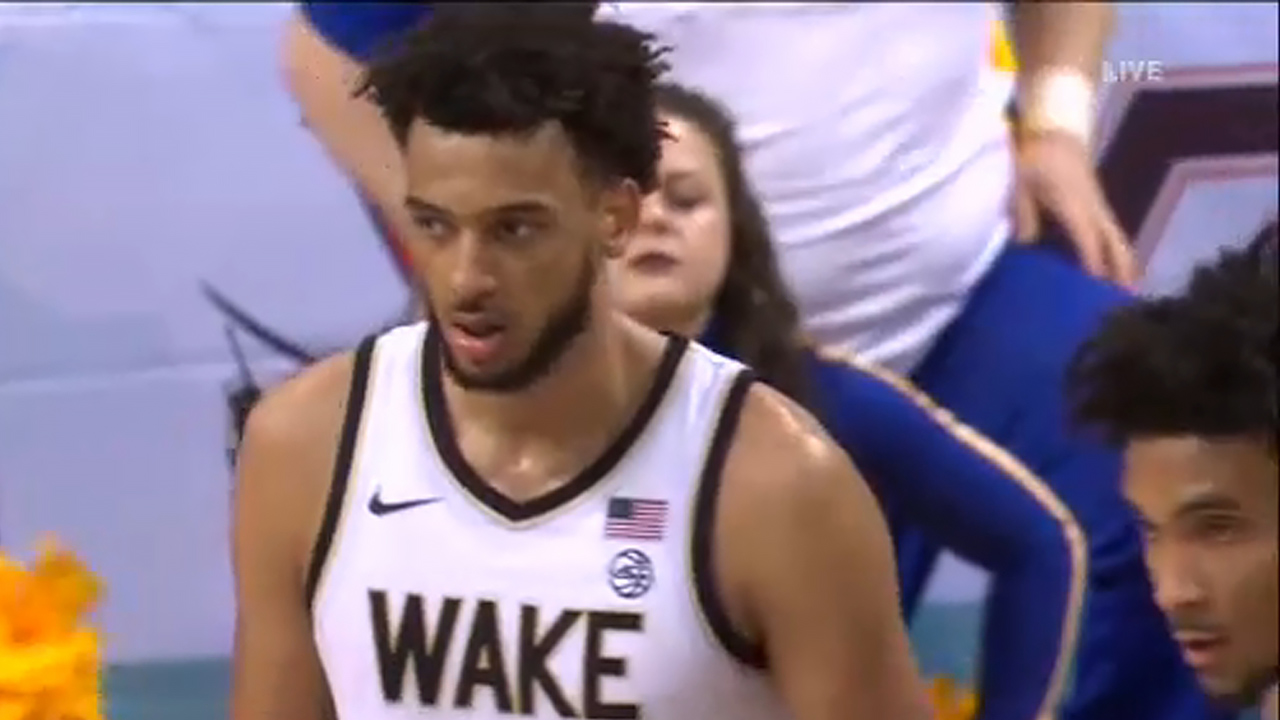 Wake Forest's ACC Tournament ended with an 81-72 loss to Pitt.

He gave his players two days off late last week and told them to get away from the game completely, citing physical and emotional fatigue following a brutal ACC schedule.

"I thought Justin was one of the ones that hit the wall the hardest," Capel said.

Champagnie said getting away helped.

"I feel like getting away from basketball sometimes is good for us as kids, so we could like regain focus on like what's the task at hand," Champagnie said. "So I feel like it played a big part in how we came out here and played."

Champagnie drained 3-pointers, scored on back cuts and found ways to get to the rim.

"He's able to shoot the ball from the perimeter," Capel said. "He's continuing to get better at putting the basketball on the floor. That's the next part of his game. He can finish around the basket. That's what he did in high school."

The Demon Deacons led 41-40 at the half behind 17 points from Mucius, who was able to use his size and length to step out and knock down 3s over smaller defenders. But Mucius picked up his fourth foul seven minutes into the second half and had to take a seat on the bench. He was held to two points in the second half.

Still, it was nip and tuck the rest of the way with neither team leading by more than four points in the second half until Champagnie buried a 3-pointer with 3 1/2 minutes left to put the Panthers up 73-68.

Champagnie, as he had done multiple times during the game, then scored on a dunk off a baseline backdoor cut. McGowens drove and banked a shot off the glass to give Pitt its largest lead at 79-70 with 1:40 left and the Panthers clearly began to smell the victory.

It was the final game for Childress, who embraced his father, Randolph, after the game in an emotional moment.

"I can't thank him enough," said Childress, who talked about riding the bus with his father and watching game film before getting a home-cooked meal. "It is a bond that will never be broken."

For Wake Forest, questions remain surrounding the future of Manning, who is 30-80 overall in ACC regular-season play. Manning said after the game that he "absolutely" expects to be back next season as Wake Forest's coach.

"I think our team has definitely improved," Manning added. "I think if you look at the individuals that are on our team and how they have come from where they were last year to where they're at right now, I think without question there's been improvement. ... I definitely feel like we have taken some steps, not as many as I would like, not where I'm content with where we're at, but I certainly feel like we have taken those steps in a direction that I want our program to go in."

N.C. State practices in Greensboro as it awaits Pitt.

The Wolfpack knows there may be little room for error as they seek to make the NCAA tournament after being snubbed last year and participating in the NIT.

"Every game that we play from this point on, any tournament situation, it's you win or you go home," N.C. State coach Kevin Keatts said Tuesday during practice at the Greensboro Coliseum. "And so I think that's important to us and I think they understand that."

Pack players know they are considered a "bubble team" for the NCAA tournament.

A public shuttle bus service to and from the Coliseum Complex will be available beginning Wednesday. The shuttle will operate from Entry F of the Sheraton Greensboro at Four Seasons (3121 Gate City Blvd.) to the ACC Hall of Champions at the Coliseum Complex.

Shuttle service is $5 per person for round-trip service. Shuttles will run continuously during the following times: