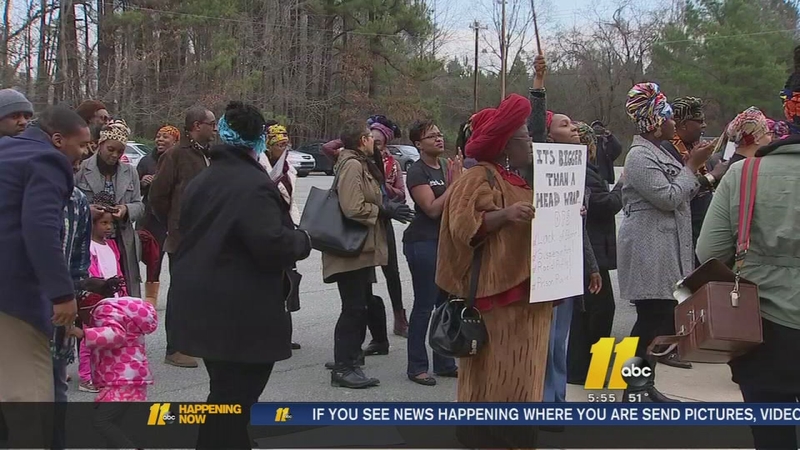 DURHAM (WTVD) -- Durham parents are protesting against Durham County Public Schools' dress code policy which they say discriminates and should be changed. They want their children to be able to wear African head wraps to school without facing potential punishment.

The issue started when the students from the group Young Women of Excellence wanted to wear traditional African gele head wraps in honor of Black History Month.

Afiya Carter says her 15-year-old daughter and her classmates were not allowed to wear the head wraps. On Monday, parents gathered at the School for Creative Studies to sing and chant in protest against Durham County Schools' dress code policy.

But the school denies the students were threatened with disciplinary action.

Instead, the school district says that after meeting with the students, the principal decided to allow them to wear the African geles on Monday as an instructional tool.

"I have heard the concerns of parents and community members who feel our policy prohibiting hats and head wear is too strict or that it infringes on student's cultural expression.

I understand their concerns and assure them that I will share their thoughts with the committee that is currently reviewing and suggesting revisions to our Code of Student Conduct.

In the meantime, I appreciate both the initiative shown by the young women at SCS and the school's willingness to give these student leaders an opportunity to incorporate their ideas into a school-wide program. The gele, its history and how to wear it are now part of the school's Black History Month activities for both middle school and high school students.

I can also tell you that SCS had an extensive schedule of Black History Month programs already. Daily seminars for high school students and other activities in middle school. But after meeting with the young women and incorporating their ideas, they've added themed Mondays and a Black History announcement as part of the morning messages. The members of the Young Women of Excellence group will be the ones making those announcements."

The committee reviewing the school code of conduct consists of community leaders, school leaders and parents. The committee will present its proposal on Thursday night before council at 4 p.m.

The parents protesting say they will attend.