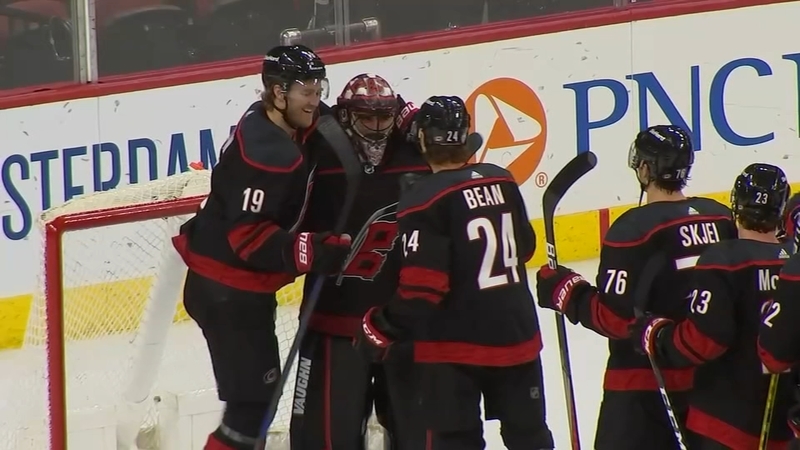 RALEIGH, N.C. (WTVD) -- The Carolina Hurricanes can close out the series with a win Thursday night in Nashville. Starting in net and making his sixth consecutive postseason start is Alex Nedeljkovic, who has recorded 165 saves and a shutout this postseason.

"It was very crazy," said Theresa Nedeljkovic, Alex's mom. "When they said those stats that Cam Ward was the only other one doing it, we just brought to mind that when he first went to camp, his first year, he was like 'I met Cam. He was real nice. He introduced himself to me. It was neat.'"

It was a surreal moment for his father, too.

"At the beginning, it was kind of, I don't know, just to see him on TV or whatever it was like, he made it," Nenad Nedeljkovic, Alex's dad, said. "He's finally there."

Playing in the NHL is something Ned -- as the Caniacs call him -- or Alex as his parents call him -- dreamed of doing since he was in grade school.

"There's a poster, they did a thing in school," his dad said. "I think it was first grade, second grade, and he wanted to put on there to be an NHL player, to make it to the NHL. We still have that picture. We posted it when he played his first game in Vancouver."

Along with wanting to make it to the NHL, that poster included people who are important to him, which he wrote, his friends, family and teachers. Alex is the oldest of four, he has two sisters and a brother all of who have been by his side during his journey to the NHL, one that hasn't always been easy.

"Confident, not cocky," Theresa Nedeljkovic said. "That's what I always tell him."

"He always believed in himself," Nenad Nedeljkovic said. "There were always doubters, he was too small or this. Growing up playing there were all these other bigger-named kids; he just kept battling, kept believing in himself and kept proving everybody wrong."

His parents said his work ethic was an advantage.

"He's a go-getter," Alex's mom said. "If he wants something and he wants it bad enough he's going to work hard for it and he has."

The 25-year-old Nedeljkovic was drafted by the Canes in 2014 in hopes of becoming their goalie of the future. He won the Calder Cup with the Charlotte Checkers in 2019, but he didn't get his big break until this season when Petr Mrazek went down with an injury.

He finished the regular season 15-5-3 with three shutouts leading him to be named the starter for the first round of the postseason.

"Guys at work saying, hey, I saw your kid, he's playing," Nenad Nedeljkovic said. "Then there was a time where it was like, is it really happening and now it's kind of like I'm getting used to it watching him now and stuff, but it's still when he was younger you dream about it, hoping he would make it. He's there."

Throughout his journey of highs and lows, there has been one constant: the message Alex gets from his mom before every game.