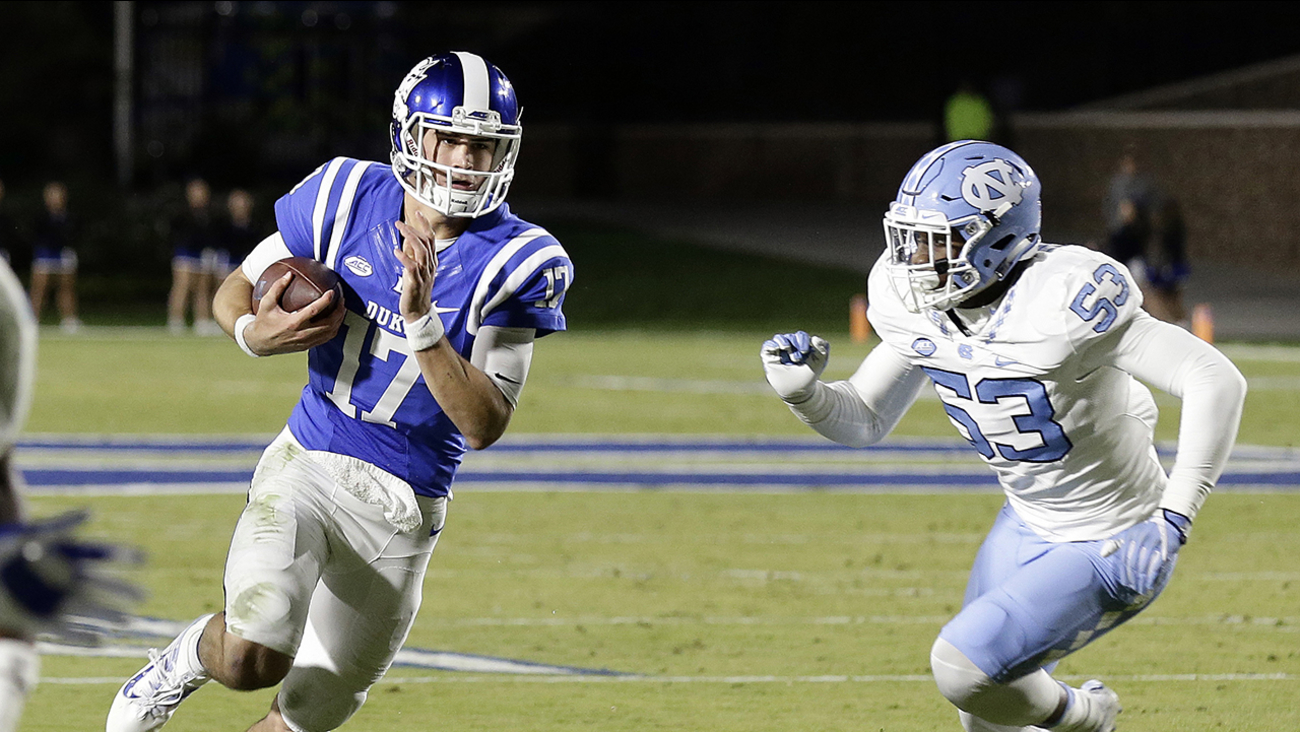 Daniel Jones ran for two scores and threw for another against the Tar Heels on Nov. 10, 2016. (Gerry Broome)

Let me preface this by saying I'm not a super hardcore football guy. I don't watch All-22 tape or get fascinated by the machinations of line play.

By and large - I'm just like you, yelling at the screen as my favorite team (Utah) doesn't do exactly as I want and then screaming in joy when they do well anyway.

That said - my actual job entails watching lots of college football and then developing some - relatively - informed opinions. Also - I'm an official ACC voter, a responsibility I undertake with the gravest sense of duty this side of selecting my fantasy football team.

With the preamble out of the way - here is my Preseason All-Triangle Football Team - Part One - The Offense:

This was essentially a choice between Jones and NC State's Ryan Finley as UNC, in a revolutionary scheme, will not field a QB this year. I like Jones to improve markedly on his numbers last year, when he was unexpectedly thrust into the starting job. If Cut says the kid can play, I'm buying. Finley was capable last year and has weapons at his disposal. I just feel like we've seen him closer to his ceiling.

It says right there in the Duke game notes that Wilson is the only active player in the country with 80+ yard rushing, receiving and return TDs to his name. He's shown big-hitting capabilities starting from his freshman season. Duke's line needs to help a little here to improve on last season's milquetoast results, but Wilson can go. Gave consideration to Reggie Gallaspy, as I think he'll fill Matt Dayes' shoes capably. No idea what to expect from Jordon Brown or whoever takes over in Chapel Hill.

A returning starter and proven commodity, when healthy. He needs to be the rock of UNC's line.

Ummmmm. He is from Tarpon Springs and they have great Greek food down there. Just don't tell State's 6'5, 330-pound Terronne Prescod I passed him over.

Davis is the obvious pick as a proven, high-level performer.

A starter since his freshman year, when he kept a good luck apple under his bed, Adams is another easy choice here. Plus - he plays serious tennis and I love me some tennis.

Another guy who's been on-and-off starting since his freshman season. He and Adams should make the right side friendly territory for Pack backs.

Essentially a toss-up category with his own teammate Carl Tucker, Cole Cook at State and Duke's TE by committee. Seems like Fritts is the one who'll be most essential to his team.

Speaking of being essential to his team, Proehl's about the only guy we've seen catch a pass among UNC's wideouts. He probably needs to grab 80 receptions this year.

I'm really big on Harmon. Has the size, the ability and the moxie to become a big-time playmaker for the Pack.

While he's been a relatively prolific pass catcher so far at Duke, the big plays and TDs have been slow to arrive. I expect an uptick in both departments this year.